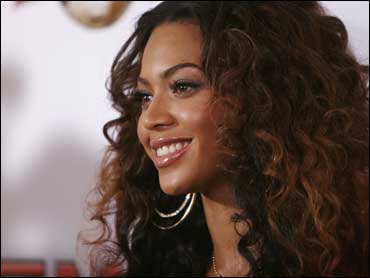 Beyonce and Fergie each received Latin Grammy nominations Wednesday, but that doesn't mean they've ditched pop for salsa or merengue. They're in the running for the awards thanks to collaborations with Latin pop stars Shakira and Daddy Yankee respectively.

Fergie, along with fellow Black Eyed Peas member will.i.am, are featured on Daddy Yankee's "Impacto (Remix)" which was nominated for best urban song. Beyonce teamed up with Shakira for record of the year nominee "Bello Embustero (Beautiful Liar)."

Dominican singer-songwriter Juan Luis Guerra leads the list of nominees with five nods including album of the year and best merengue album for "La Llave De Mi Corazon" and record of the year, song of the year, and best tropical song for the title track. As previously announced, Guerra will be presented with the person of the year award for his contribution to Latin music and his work with orphans and abandoned children.

Ricky Martin follows with four nominations for album of the year, best male pop vocal, and best long form video for "MTV Unplugged" and record of the year for "Tu Recuerdo" with La Mari de Chambao and Tommy Torres.

Video: More from the red carpet with Alejandro Sanz, Alejandra Guzman, and others.

In a statement sent to The ShowBuzz, Martin expressed his "deepest gratitude to my musical peers in the Latin Recording Academy for recognizing an album that has meant so much to me. To have other musicians react with the same appreciation that fans have had for the MTV Unplugged album is incredibly rewarding."

The 8th Annual Latin Grammy Awards features awards in 49 categories and will be broadcast live Nov. 8 from the Mandalay Bay Events Center in Las Vegas on Univision from 8 p.m. to 11 p.m. ET/PT.