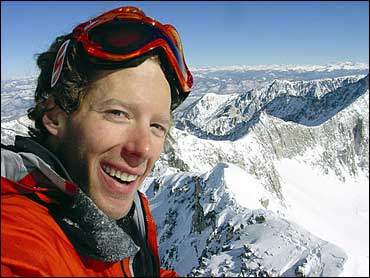 Last year, Aron Ralston set off for a day of hiking in the canyons of southeastern Utah. Though he was an experienced outdoorsman, nothing could have prepared him for what would happen that day. As he scrambled through a narrow crevasse in a canyon, his arm became pinned by an 800-pound boulder.

"The adrenaline was pumping very hard through my body," he recalled. "I was throwing my body against the boulder, seeing if it would budge at all."

After five days of waiting to be rescued, Ralston decided to use a multi-purpose tool to amputate part of his own arm.

"My mental state varied a lot," says Ralston. "It ranged from depression, of feeling like this was possibly the end, feelings of remorse."

After performing the makeshift surgery, he then rappelled 60 feet to the canyon floor and hiked five miles before being rescued. He recounts the harrowing story in a new book titled "Between a Rock and a Hard Place."

In talking to The Early Show co-anchor Hannah Storm about his experience, he said, "I have a perspective on it that, hellish as it might sound and gruesome as it might sound in some ways, too, that it was a very beautiful experience for me, because of coming out of there, having been a dead man for six days in the canyon, to have my life back." He calls it "one of the most enlightening things that will ever happen to me in my life."

He has been fitted with a prosthetic that allows him to handle not only such mundane activities as tying his shoelaces but also sports like skiing and mountain biking. He says, "It's a great tool that I've come to live with and love."

During the six days when he was trapped and pinned under the 800-pound boulder, he went through a couple of scenarios. He tried a couple of things before he got to the point that he amputated his arm.

"I was working through different options," he says. "I thought I could use the equipment that I had to rig up something like an improvised pulley system to lift the boulder off of my hand, that I might use my multipurpose tool that I had with me to chip away at the boulder, hacking away enough material to extract my hand."

There was a point when he carved his own gravestone, on "the most difficult of the nights, as they each got progressively colder."

But then he got the idea for a way that he could amputate this own arm. "Actually," he says, "I considered to have been in an epiphany, that it was a divine interaction."

As gruesome as it sounds, he explains, "It was the best idea I've ever had. I was stuck there because of my blade not being sharp enough to get through the bones, that amputation wasn't really an option up until (that) point."

He broke the bone instead of trying to cut through it, and he writes about cutting through tendons and veins. It was a very organized process and, yet, one cannot help but think what about the pain. Ralston says he never even cried out, "which is something quite miraculous in itself. I mean, I can tear up at the drop of a hat or if I stub my toe on the way to the bathroom in the middle of the night. I wince just like we all do, yet that's how motivated I was to go through with this. What accompanied the thoughts of having my life back drove me through every bit of this process."

He says his story actually has inspired people to go on living who have thought about killing themselves. "And some of them have written to me to tell me about that," he says, "and that fills me with such a pleasure to know that the story, this miracle that happened has touched someone's life, that it's helped them in such a way, that it's even saved their life, and that gives me a feeling of a greater purpose that I have, that I carry with me now, that I don't think I had before."

Here is an excerpt from his book, "Between a Rock and a Hard Place."

"The chockstone [a midsize boulder] shudders as my body's weight puts enough torque on the rock to disturb it from its position. Instantly, I know this is trouble, and instinctively I let go of the rotating boulder to land on the round rocks on the canyon floor. Looking up, the backlit chockstone falling towards my head consumes the sky. Fear shoots my hands over my head…

"The next three seconds play out at a tenth their normal speed. Time dilates, like I'm dreaming, and my reactions decelerate. In slow motion: The rock smashes my left hand against the south wall; my eyes register the collision and I yank my left arm back as the rock ricochets in the confined space; the boulder then crushes my right hand and ensnares my right arm at the wrist, palm in, thumb up, fingers extended; the rock slides another foot down the wall with my arm in tow, tearing the skin off the lateral side of my forearm. Then, silence."

Excerpted from "Between a Rock and a Hard Place" by Aron Ralston. All rights reserved. No part of this book may be used or reproduced without written permission from Simon & Schuster.

"Between a Rock and a Hard Place" is published by Atria, an imprint of Simon & Schuster, which is owned by Viacom, parent company of CBS.