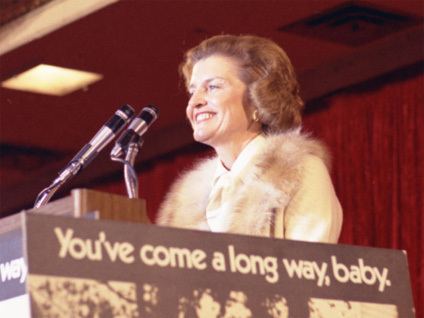 LOS ANGELES — Former first lady Betty Ford, always known for her take charge attitude, chose the people who will eulogize her and the subjects they would discuss, focusing on the power of friendship to mend political differences even in these hyper-partisan times.

Ford, who died on Friday at 93, chose former first lady Rosalynn Carter and journalist Cokie Roberts from the political realm and a former director of her Betty Ford Center to address her passion for helping others overcome substance and alcohol abuse.

Roberts, a commentator on National Public Radio and member of a noted political family, said Ford asked her five years ago to talk about a time in Washington when Democrats and Republicans were friends and partisan politics did not paralyze government.

Ford's instructions for her eulogy pointed to the strong friendship that developed when her husband, Republican Gerald R. Ford, was House minority leader and Roberts' father, Democratic Congressman Hale Boggs, was majority leader.

"Mrs. Ford was very clear about what she wanted me to say," Roberts said. "She wanted me to talk about Washington the way it used to be. She knew there were people back then who were wildly partisan, but not as many as today.

"They were friends and that was what made government possible," said Roberts, adding that the topic seems particularly appropriate this week when the two parties are divided over dealing with the debt ceiling.

Another speaker at Tuesday's funeral in Palm Desert who is symbolic of the bipartisan past will be Mrs. Carter. She and President Jimmy Carter became close friends with the Fords after Carter defeated Gerald Ford for the presidency in 1976.

Carter, the former president, spoke of their friendship at President Ford's funeral in 2007.

The two families were so close that before his death, Ford asked the Carters to join his wife aboard Air Force One, which flew his body to its final resting place in Grand Rapids, Mich.

Roberts said she expects Mrs. Carter to talk about life in the White House and the important role of first ladies in "greasing the wheels" for their husbands' accomplishments by forging bipartisan friendships.

Among the notable guests will be former California first lady Maria Shriver as well as former President Bill Clinton. The four Ford children will attend both this ceremony and another in Grand Rapids, Mich. on Thursday.

Alongside Carter and Ford as speakers will be former Betty Ford Center official Geoffrey Mason.

Mason, a former member of the center's board of directors, is expected to extoll Mrs. Ford's vision and determination in building a substance abuse and alcohol treatment center after her own recovery.

Ford's funeral will be similar to the final tributes for her husband. The ceremony, to be held at St. Margaret's Episcopal Church in Palm Desert, is billed as a private affair. Many luminaries are due but a full guest list was immediately available.

Following the funeral, members of the public will be invited to file past her casket and sign a guest book until midnight.

On Wednesday, her body will be flown to Grand Rapids where her husband is interred at the Gerald Ford Presidential Museum. At another church service Thursday, Lynne Cheney, wife of former Vice President Dick Cheney, and historian Richard Norton Smith will eulogize her.

Later Thursday, her body will be interred at the museum on the day that would have been Gerald Ford's 98th birthday.