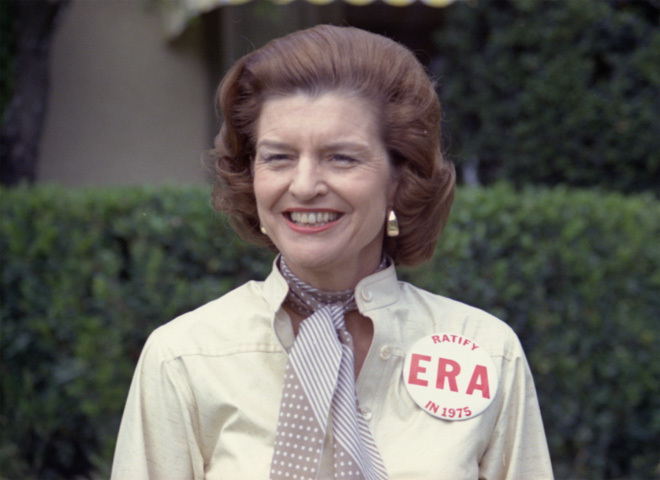 Former First Lady Betty Ford was remembered for being unafraid to speak out about social issues, at a time when politicians' spouses were usually seen but not heard.

Ford, who died Friday at age 93, was not intimidated by the public spotlight, and used her position to passionately promote causes important to her. In the process she helped remove the stigma of speaking out publicly about sensitive issues like alcoholism, addiction and breast cancer.

When asked how Ford would be remembered, presidential historian Douglas Brinkley said it was her role as a pioneer in the women's movement.

"When she became First Lady, our country was talking about the burning of bras and equal rights amendments and the need for sexual liberation, and here was a Republican First Lady who seemed quite fine with a lot of that feminist energy of being ginned up largely from the Democratic left," Brinkley said on "The Early Show on Saturday Morning."

"She had a lot of moxie, she said what was on her mind, and people will remember her as being the perfect spouse. Pat Nixon, of course, left with Richard Nixon, and Pat Nixon was much like a Mamie Eisenhower-style, old-fashioned First lady. With Betty Ford you had a progressive woman who stood on her own two feet, and while she was devoted to her husband, Gerald Ford, she also used her mind and humor in the way she chose to."

One commentator referred to Betty Ford as a "rascal." Brinkley agreed with that assessment: "I remember there's a photograph of her just dancing on the desk in the Oval Office. This was something that wasn't previously done.

"Certainly Jackie Kennedy had brought in a new sense of style and flair and fashion [to the White House], but Betty Ford was a truly liberated woman."

She could also get into trouble some, Brinkley said. "On CBS' '60 Minutes' with Morley Safer, she talked very personally about her children's lives, even her children's sex lives; that got her into some hot water.

"Of course later in life with the Betty Ford Center, that's going to be her lasting legacy. That has done an incredible amount of good for this country," Brinkley said. "Because everybody knows somebody who has a pill addiction or alcohol addiction, and she de-stigmatized it. That's her chief legacy."

In the late 1990s Brinkley spent time with Ford in Rancho Mirage, Calif. "What you quickly learn out there is she's the person who really runs that whole Palm Springs area, meaning she was royalty out in that part of California," he said. "Not only because of her nonstop commitment to the Betty Ford Clinic, but because she was so warm-hearted and generous to everybody around her.

"She made a great presence wherever she went, and her children were deeply loyal to her, so she enjoyed being a mom and a grandma the last 20 years of her life."