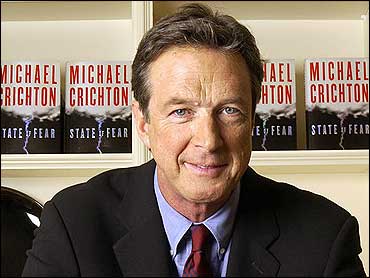 Best-selling author and filmaker Michael Crichton died unexpectedly in Los Angeles Tuesday, after a courageous and private battle against cancer, his family said in a statement. He was 66.

Crichton was a brand-name author, known for his stories of disaster and systematic breakdown, such as the rampant microbe of "The Andromeda Strain" or dinosaurs running amok in "Jurassic Park," one of his many million-selling books that became major Hollywood movies.

Crichton also created the hospital drama "ER" for television. His most recent novel, "Next," about genetics and law, was published in December 2006.

"While the world knew him as a great story teller that challenged our preconceived notions about the world around us -- and entertained us all while doing so -- his wife Sherri, daughter Taylor, family and friends knew Michael Crichton as a devoted husband, loving father and generous friend who inspired each of us to strive to see the wonders of our world through new eyes," the statement said. "He did this with a wry sense of humor that those who were privileged to know him personally will never forget."

Through his books, Crichton served as an inspiration to students of all ages, challenged scientists in many fields, and illuminated the mysteries of the world in a way all could understand.

"He will be profoundly missed by those whose lives he touched, but he leaves behind the greatest gifts of a thirst for knowledge, the desire to understand, and the wisdom to use our minds to better our world," the statement added.

Crichton's 2004 bestseller, "State of Fear," acknowledged the world was growing warmer, but challenged extreme anthropogenic warming scenarios. His views were strongly condemned by environmentalists, who alleged that the author was hurting efforts to pass legislation to reduce emissions of carbon dioxide.

Crichton's first bestseller, "The Andromeda Strain," was published while he was still a medical student. He later worked full time on film and writing. One of the most popular writers in the world, his books have been translated into thirty-six languages, and thirteen have been made into films.

Crichton won an Emmy, a Peabody, and a Writer's Guild of America Award for "ER." In 2002, a newly discovered ankylosaur was named for him: Crichtonsaurus bohlini.

A private funeral service is expected, but no further details will be released to the public.