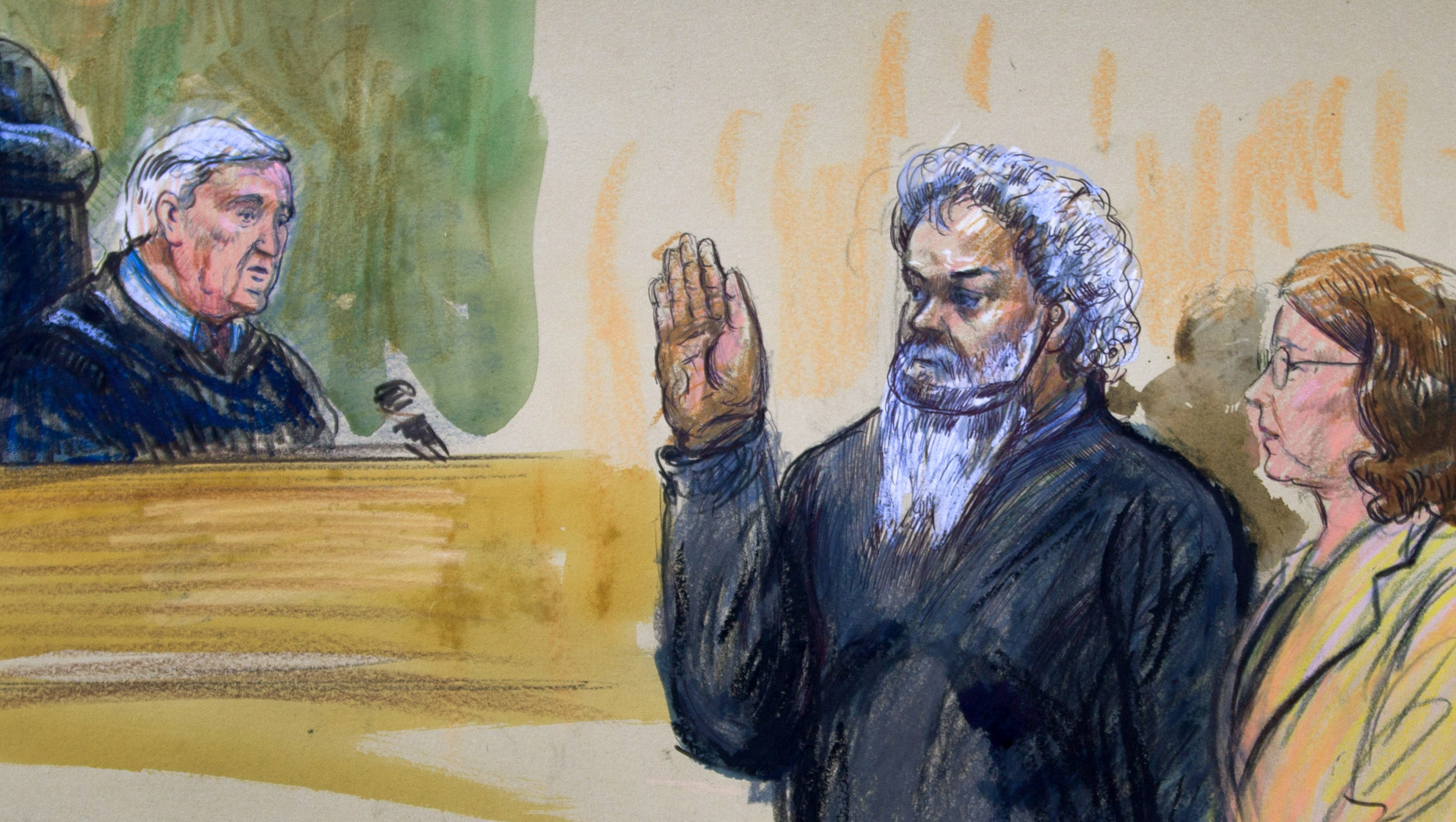 Ahmed Abu Khatallah, a suspect in the September 2012 attack on a U.S. facility in Benghazi, pleaded not guilty to new murder charges and the government declined to say Monday whether anyone else will be charged in this case.

CBS News' Paula Reid reports that Khattalah, the suspected leader of the attack against the U.S. diplomatic compound, appeared Monday morning in federal court. He entered the courtroom wearing a green jumpsuit, no handcuffs or restraints, and he was escorted by three U.S. Marshals.

Khatallah appeared before Judge Christopher R. Cooper in the U.S. District Court for the District of Columbia to be arraigned on 17 additional charges which carry a possible death sentence if convicted. Through his lawyer, he entered a plea of not guilty and requested a speedy trial. Khatallah did not utter a single word during the hearing. He listened to the proceedings on a headset with help of a translator.

The next hearing is scheduled for December 9.

Khattalah, 43, the first militant to be prosecuted for the Benghazi violence, had initially been charged with conspiracy to provide support to terrorists, resulting in death. U.S. officials had described that initial, one-count indictment as a placeholder to allow for him to be brought into court and for a grand jury to hear more evidence.

The new indictment does not add to the public account of how the attacks unfolded but it does include multiple counts that make Khattalah eligible for the death penalty if convicted, including murder of an internationally protected person and killing a person during an armed attack on a federal facility. It also accuses him, among other charges, of providing material support to terrorists, malicious destruction of property and attempted murder of an officer and employee of the U.S.

Reid reports that after the arraignment, the parties had a status hearing where both sides, once again, fought about the amount of discovery that the defense has received.

Khatallah's federal public defender argued that she has only received a "small amount" of discovery. She said that the new death penalty eligible charges broaden the scope of what information the government should provide to her.

The government said that it has passed along about 60 to 80 percent of its evidence and is moving as fast as they can. The judge asked whether this will remain a one defendant case and the government would only say "the investigation is ongoing."

After his capture during a nighttime raid, Khattalah was brought to the U.S. aboard a Navy boat where he was interrogated by federal agents. He remains in custody at a detention facility in Alexandria, Virginia. Khattalah earlier pleaded not guilty to the terrorism conspiracy charge.

One of his public defenders, Michelle Peterson, said last summer that prosecutors had not presented evidence tying him to the attacks.

"It is important to remember that an indictment is merely a set of allegations or charges, it is not evidence," she said Tuesday evening. "We will vigorously defend Mr. Abu Khatallah? in court where the government will be forced to prove his guilt, based upon actual evidence."

Federal prosecutors have long accused Khattalah of being a ringleader of the Sept. 11, 2012, attacks that killed Ambassador Chris Stevens and three other Americans. Attorney General Eric Holder said the new indictment reflects Abu Khattala's "integral role" in the attacks.

The superseding indictment alleges that Abu Khattala was involved in two different attacks, hours apart, on the diplomatic compound. The violence, which quickly emerged as a flashpoint in American political discourse, was aimed at killing American personnel at the compound and looting the buildings of documents, maps and computers, the Justice Department says.

In the first burst of violence on the night of Sept. 11, prosecutors allege, Abu Khattala drove to the diplomatic mission with other militants and a group of about 20 breached the main gate and later launched an attack with assault rifles, grenades and other weapons. That initial attack killed Stevens and communications specialist Sean Smith and set the mission ablaze.

Prosecutors say Khattala supervised the plunder of sensitive information from that building, then returned to a camp in Benghazi where a large group began assembling for an attack on a second building known as the annex. The attack on that facility, including a precision mortar barrage, resulted in the deaths of security officers Tyrone Snowden Woods and Glen Anthony Doherty, authorities say.