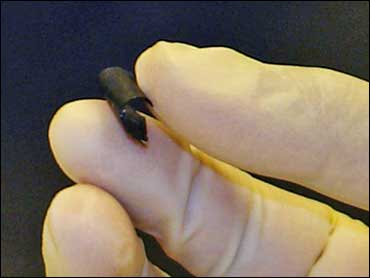 It's a battery that looks like a piece of paper and can be bent or twisted, trimmed with scissors or molded into any shape needed.

While the battery is only a prototype a few inches square right now, the researchers at Rensselaer Polytechnic Institute who developed it have high hopes for it in electronics and other fields that need smaller, lighter power sources.

"We would like to scale this up to the point where you can imagine printing batteries like a newspaper. That would be the ultimate," Robert Linhardt, a professor at the Center for Biotechnology and Interdisciplinary Studies at RPI, said in a telephone interview.

The development is reported in this week's online edition of Proceedings of the National Academy of Sciences.

Students at the school in Troy, N.Y., were the inspiration for the work, said Linhardt, whose students were working on methods to dissolve paper and cast it into membranes for use in dialysis machines.

The two groups got together and realized they could use paper instead of polymers and combine the two projects.

Then came Omkaram Nalamasu's students, also at RPI, who said the project — a thin sheet black on one side and white on the other — looked like an electrical device.

Over about 18 months, the groups developed the projects, into a battery, a capacitor — which stores electricity — and a combination of the two.

Ajayan sees potential uses in combination with solar cells, perhaps layers of the paper batteries that could store the electricity generated until it is needed, he said in a telephone interview.

Perhaps it could be scaled up and shaped into something like a car door, offering moving electrical storage and power when needed.

That might be an expensive proposition, however, cautioned Peter Kofinas, an engineering professor at the University of Maryland.

"The advantage of a flexible device would be that you could roll it in a film or a sheet. However, carbon nanotubes are very expensive," said Kofinas, who was not involved in the research.

"So from the commercial standpoint, this would be very expensive if you want to make a large sheet out of this material," he said via e-mail. In addition, he said, "It does not look like it performs better than currently available batteries and supercapacitors in the market."

Because of its flexibility, however, it does have potential, Kofinas said.

The research was funded by the New York State Office of Science, Technology and Academic Research and the National Science Foundation.