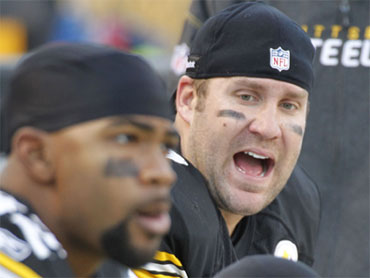 The Steelers returned to the Steel Curtain days of the 1970s. The Raiders went back to the bad old days of the last seven years.

There were punches and penalties, a Steelers defense that wouldn't stop and a Raiders offense that couldn't get started. One week after getting embarrassed by the Patriots, a year after losing to Oakland, James Harrison and the Steelers tossed around the Raiders like it was a playground pickup game while beating them 35-3 on Sunday.

Raiders defensive end Richard Seymour punched Ben Roethlisberger in the jaw with an open hand, but the Steelers never flinched. They shrugged off a club-record 163 yards in penalties, chased a bewildered quarterback Jason Campbell from the game and punished the Raiders like the Steel Curtain teams of the '70s did so many opponents.

The Steelers (7-3), still tied with Baltimore for the AFC North lead, were motivated by last week's 39-26 home-field loss to New England and last year's 27-24 defeat to Oakland that all but ruined their season.

"It definitely was an old school, physical type game from back in the day," linebacker James Farrior said. "That's the type of game we wanted to make it, a physical game, and improve from our performance of last week."

Harrison, the former AP NFL Defensive Player of the Year, did much of the damage with five tackles, two sacks, an interception and a forced fumble. He also took one of the Steelers' six personal foul penalties for slamming Campbell to the turf as the quarterback threw a pass.

"We didn't worry about the calls," Harrison said. "When you're getting a lot of penalties against you, it brings you together."

Seymour, long one of the NFL's top defensive players, displayed Oakland's frustration by striking Roethlisberger in the face as the quarterback celebrated throwing a TD pass to Sanders late in the second quarter.

"I've never seen a quarterback get punched since I've been in this league," Steelers coach Mike Tomlin said.

"I'm not sure why he ran up on me," said Seymour, who apologized to his teammates for being ejected. "I just turned around and it was a natural reaction."

"I heard that Big Ben said something," defensive lineman Tommy Kelly said. "I guess Big Rich didn't like it."

What the Raiders (5-5) most disliked was getting shoved around like the Raiders teams that lost at least 11 games each season from 2003-09. Oakland fell out of a tie for the AFC West lead as Kansas City (6-4) beat Arizona 31-13.

Oakland averaged 458 yards and 38.6 points during its three-game winning streak, but had only 52 yards - 11 rushing - as the Steelers opened a 21-3 halftime lead.

"We played against a really tough defense today that got after us," said Campbell, who was 7 of 19 for 70 yards and an interception. "Once we got behind the 8-ball and they got all the momentum, they just kept bringing it and bringing it."

Campbell never had a chance against a Steelers defense that forced three turnovers, two that became touchdowns, had six sacks and limited Darren McFadden to 14 yards on 10 carries, 94 below his average. The Steelers have allowed only one 100-yard rusher in 44 games.

The Raiders were so ineffective, the Steelers had more penalty yards than they had offensive yards until deep in the third quarter. The Steelers outgained them 431-182 as Roethlisberger threw touchdown passes of 52 yards to Mike Wallace, 22 yards to Emmanuel Sanders and 16 yards to Isaac Redman and scrambled 16 yards for a touchdown.

"I don't know how a team can overcome that many penalties, but we did it," Sanders said.

Roethlisberger was 18 of 29 for 275 yards and had 55 yards rushing. Wallace had his fifth 100-yard receiving game with 116 yards, and Rashard Mendenhall's 15-yard TD run put Pittsburgh ahead to stay 7-3 in the second quarter.

While the penalties didn't affect Pittsburgh's domination, the many calls inflamed their fans. The Harrison penalty so upset the crowd of 64,987 that it booed for the ensuing three plays, and fans began a derisive cheer aimed at referee Tony Corrente.

"Their defensive guys were hitting our offensive guys and there were no penalties," Harrison said. "I believe if it happened the other way, there would have been a lot more penalties called and maybe they would have kicked five or six of us out of game."