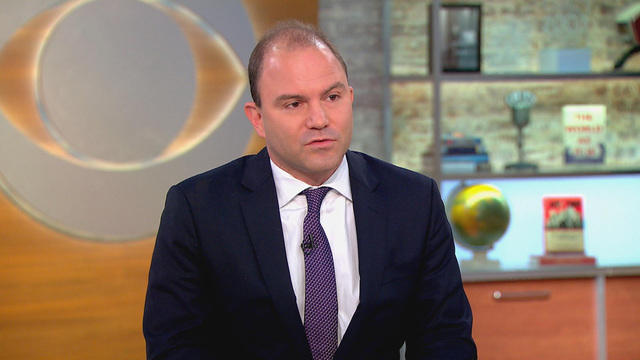 Ben Rhodes, who served as President Obama's campaign speechwriter and later his deputy national security advisor, said Monday the Trump administration's reversal of so many Obama administration policies is based not on ideology but simply because they were put into place by President Obama.

Rhodes (who is the brother of CBS News president David Rhodes) joined "CBS This Morning" to discuss policymaking in the Obama administration, and his new book, "The World as It Is: A Memoir of the Obama White House."

Co-host Gayle King asked Rhodes whether Mr. Obama or other members his administration feel that the current president is now trying to "unravel and undo everything that the Obama administration did."

"There are certain policies that they've targeted – Paris climate agreement, Cuba, TPP," said Rhodes, referring to the Trans-Pacific Partnership trade deal. "There's not an ideological rationale for why you would take down all of those policies, other than that Barack Obama did them."

"I say in the book we didn't get everything right. I say that there are things I'm not certain about, and I'll be saying it for the rest of my life. I'll be thinking about the decision-making on Syria the rest of my life," Rhodes said, reflecting on the shortcomings of the U.S. response as Syria's civil war spiraled out of control.

"[But] the fact that America is a progressive, inclusive country that has a future that is more inclusive and more diverse, that I truly do believe. And frankly I think the project of the Obama presidency that will endure for decades, that's the direction America is headed – and that's not the direction Donald Trump is headed.

"So, I think when history has its accounting, America is going to end up looking a lot more like the Obama presidency than the Trump presidency."

When asked about a comment by Mr. Obama following the 2016 election in which he said, "What if we were wrong?," Rhodes said, "President Obama wasn't unlike a lot of Americans after the election. He was trying to figure it out. There were different theories: Was it Russian meddling? Was it the campaign that the Democrats ran? We were on that last foreign trip and I was sitting with him in his presidential limousine and he'd read a column saying that maybe Democrats had pushed too far in the embrace of globalization and had gotten away from that sense of identity that is important to people, part of which was what President Trump had stoked.

"But I think, frankly, the reality is, any number of causal factors led to President Trump, and what I answer in the book is that question, which is, I don't think we were wrong."

Co-host Norah O'Donnell asked if Mr. Trump won on a message of change.

"That was his message," Rhodes said. "The racism and misogyny was also a part of the message, and that's important to know."

Rhodes said he felt "shell-shocked" by Clinton's loss, and admitted not considering the likelihood of a Trump win. But when asked whether the question "What if we were wrong?" was an indictment of the American electorate for not being willing to further the advances of Mr. Obama's presidency, Rhodes replied, "Absolutely not. What President Obama has said his entire political career is, his bet was always on the American people. He couldn't become the first African-American president, a two-term president, without the confidence of the American people.

"I think what he's getting at is a bigger phenomenon in the world. We were on a trip that led up to that comment that he made, when we saw Angela Merkel in Germany who'd taken huge flack for letting in Syrian refugees. She literally had a tear in her eye the last time she saw President Obama. We left Justin Trudeau sitting there alone wondering what was going to happen with President Trump, and now we see.

"We've seen the President Xi Jinping of China, who made kind of an ominous comment to us that if an immature leader throws the world into chaos, the world doesn't know who to blame. He was not talking about President Obama!

"And I think what he's referring to there is a sense of globalization, of immigration, trade. We're part of an enterprise, basically, a liberal international order that had pushed very far at changing the nature of our world over the last several decades, and the question is, did that get too far ahead of voters in places like the United States and United Kingdom who were feeling a sense of uncertainty because of that change?"

With regard to Mr. Trump's moving forward with plans for a summit with North Korea later this month, co-host John Dickerson asked, "I know you're not a fan of President Trump, but doesn't he deserve his due in getting this to where it's gotten so far?"

"Look, I think diplomacy is preferable to military conflict. The question is, what does that diplomacy produce? What I think is most likely is you'll see the North Koreans make commitments to denuclearize in the future, but in the past we've seen them make those commitments and not follow through. The follow-through is a question for them."

"The World as It Is: A Memoir of the Obama White House" by Ben Rhodes (Random House) is available via Amazon.