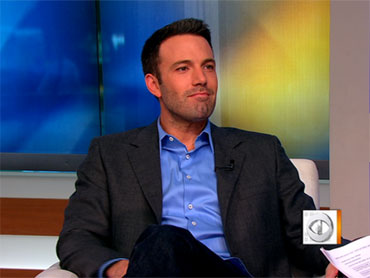 Audiences know Ben Affleck best as an actor. He also won a screenwriting Oscar with Matt Damon for "Good Will Hunting," and he got rave reviews for his first effort as director in "Gone Baby Gone," starring his brother, Casey Affleck.

Now he brings all those efforts together in the new crime thriller, "The Town."

"Jeremy's great. He's a brilliant actor. We were lucky to have him," Affleck said.

Affleck went on to talk about what it was like to film in his hometown, the residents' reaction and how he has evolved from an actor to a director.

Smith even revisited Affleck's "Bennifer" days -- when he was engaged to actress/singer Jennifer Lopez and was constantly hounded by the tabloids.

(He is now married to actress Jennifer Garner and has two daughters.)

So what was his reaction?