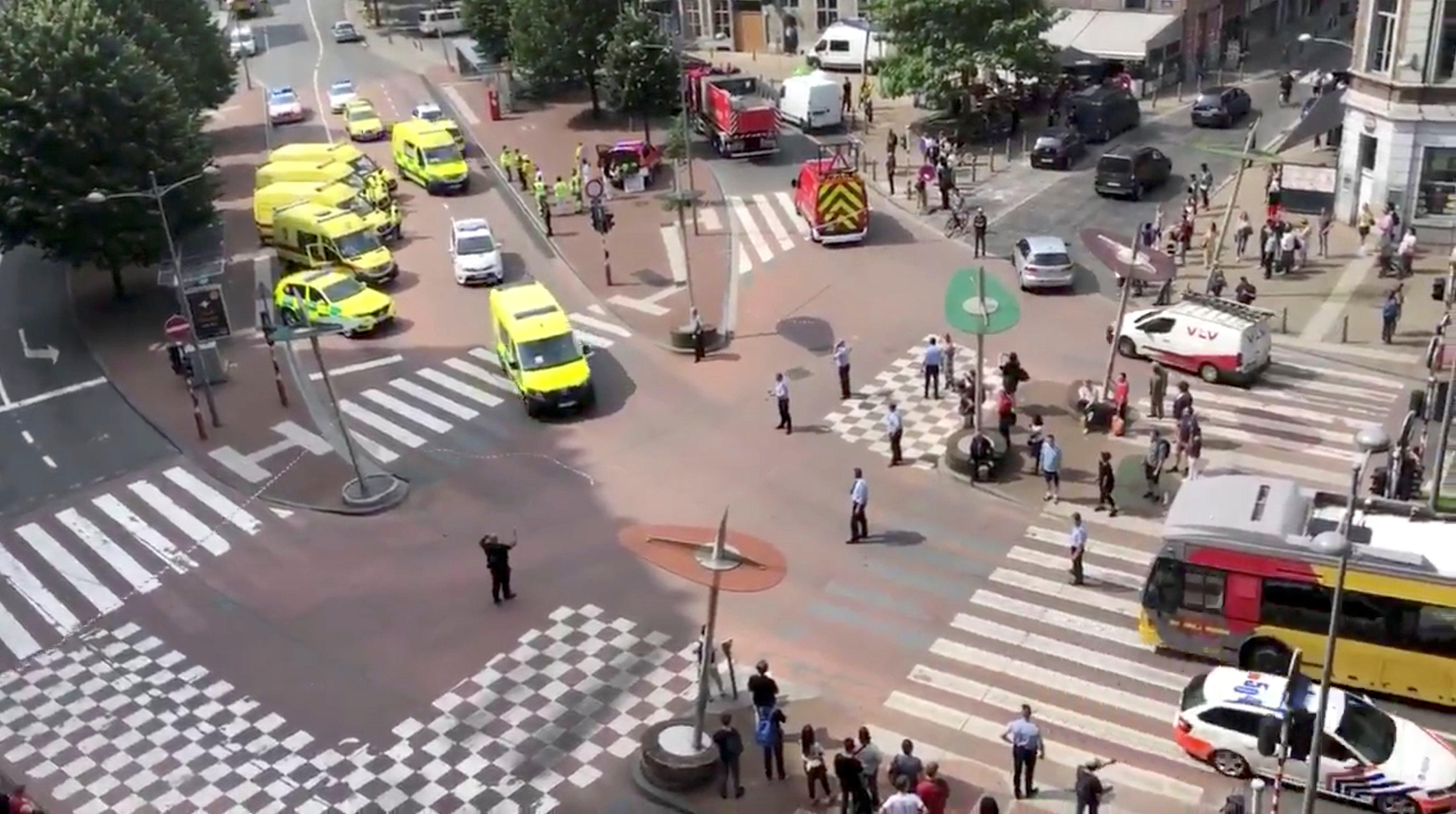 LIEGE, Belgium -- A knife-wielding prison inmate stabbed two female police officers in the Belgian city of Liege, stole their service weapons and shot them and a bystander dead in an attack Tuesday that prosecutors fear could be terror-related. Justice Minister Koen Geens said the assailant, who was later killed by police, was on a two-day leave from prison. Geens described him as a repeat offender who had been incarcerated since 2003 and was due for release in two years.

The slain officers were 45 years old and 53 years old, the latter the mother of twins, said police Chief Christian Beaupere. Four other officers were wounded in the attack, one of them seriously with a severed femoral artery.

"The goal of the attacker was to target the police," Beaupere said.

The attack unfolded outside a Liege cafe on Tuesday morning. Liege prosecutors' spokesman Philippe Dulieu said the man crept up on the two officers from behind carrying a knife and stabbed them several times.

"He then took their weapons. He used the weapons on the officers, who died," Dulieu told reporters. The two police handguns had a total of 17 bullets.

Dulieu said the attacker then shot and killed a 22-year-old man in a vehicle that was leaving a parking space outside a nearby high school. He then took two women hostage inside the school.

"Liege police intervened. He came out firing at police, wounding a number of them, notably in the legs. He was shot dead," the spokesman said.

Belgian media identified the suspect as Benjamin Herman, a Belgian national born in 1982 who had a criminal record that included theft, assault and drug offenses, state broadcaster RTBF reported. The federal prosecutor's office declined to comment.

Belgian Prime Minister Charles Michel said Herman was indirectly mentioned in state security reports on radicalization, "in notes that did not primarily target him, but others or other situations."

The prime minister said Herman's name was not on a list maintained by an anti-terror assessment group.

Asked about reports that Herman had been radicalized in prison, Geens said "at the moment there is very little consistent we can say about that."

"In any case, he is not a clear-cut case, on the contrary," Geens said. "He certainly was not someone who could clearly be qualified as radicalized. Otherwise he would have been known as such by all services."

But a senior official at the federal prosecutor's office told The Associated Press that "there are indications it could be a terror attack."

Despite this, Belgium's crisis center said it saw no reason to raise the country's terror threat alert for now.

Yves Stevens of Belgium's federal crisis center said that security in Liege is under control, and that there was no reason yet to raise the national terror threat level.

"There is absolutely no confirmation yet that the incident is terror-related," Stevens told the AP.

Belgian police and military have been on heightened alert since suicide bombers killed 32 people at the Brussels airport and subway system in 2016.

Liege Mayor Willy Demeyer said "all flags on municipal buildings" were to be flown at half-staff and that a service would be held at 1 p.m. local time Wednesday to honor the victims. A book of condolences will also be placed in the local town hall, BBC News reports.

It's not the first time Liege has been hit by a violent attack. In December 2011, a man with a history of weapons and drug offenses left home with hand grenades and guns before he lobbed the grenades into a square filled with Christmas shoppers and fired on those who escaped. Five were killed, including the assailant.