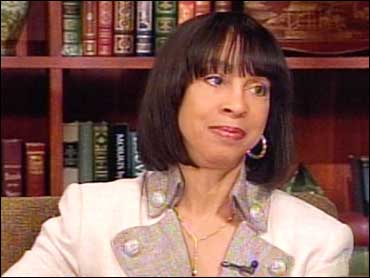 "Mental illness is a kind of slavery. We won't always have to hide and run and do our work in the dark. The day is coming when people with brain diseases won't be written off or warehoused, when everyone will know that recovery is possible."

So writes Bebe Moore Campbell in her new novel, "72 Hour Hold." It is the story of a mother dealing with her teen daughter's bi-polar mental illness. Click here to read an excerpt.

Moore Campbell tells The Early Show co-anchor Rene Syler the title of her book is a term used by psychiatric institutions and hospitals.

"It's the amount of time that a psychiatric facility can hold a mentally ill person against his or her will if he or she meets the criteria of a danger to self or others or is gravely disabled," Moore Campbell explains, "When you call 911, if you have a mentally ill loved one, who is perhaps acting out because of noncompliance, he or she can go into a 72 hour hold. The problem is that it is kind of like a band-aid for a hemorrhage because 72 hours is sort of like a time-out. It takes four to six weeks to get any kind of medication into the system that would really help control the effects of illnesses."

The book is a work of fiction. Moore Campbell is quick to say that it is not her life, but it is drawn from life experiences she knows about. "I have a mentally ill family member," she says, "I've been on the journey with my own loved one for eight or nine years."

"This girl begins to show signs of illness just as she's on the cusp of going off to Brown University. Great student," Moore Campbell says, "Of course, the mother is devastated. Gets her the help. She seems to be on the right track. Then Trina's off: stopped taking the meds, starts smoking marijuana. And the mother is devastated, and is trying to find healing as well as juggle what's going on in her own life: romance, business, friendships. But everything stops in order to try to save this child."

Moore Campbell says notes for the first three years when her own family member became ill, she was reluctant to talk about it outside of her family.

"I felt very stigmatized, very shut down, very ashamed," she says, "Then my journey has been one of reaching out for support, for friends."

She learned about the National Alliance For The Medically Ill and co-founded an affiliate chapter in Los Angeles. And through her efforts and others, they got July named National Minority Mental Health Month in Washington, DC. She is encouraging churches and groups to have seminars and open houses to talk about mental illness.

"It's been my loved one's journey, but it has also been my own," Moore Campbell says, "My mission, as I go around on book tour, is to get people to come out of the closet about having mental illnesses. Recovery is possible. There are no cures. But there are some good medications, some good psychotherapy that can help control them."

Moore Campbell believes that the stigma of mental illness is "more keenly felt" in the African American community. People of color are already stigmatized and this just gives people one more thing to be judgmental about.

"No one wants to say I'm not in control of my mind," she explains, "For African-Americans and other people of color, it's almost like a double whammy because we're stigmatized by virtue of the color of our skin. We don't want to say that there's something else that deems us less. So we go into denial. We don't trust the medical establishment. We remember Tuskegee, those experiments. But the effects of not getting help, of being in denial are devastating because in a community that's already disproportionately represented in prison, people who walk around with untreated mental illnesses, wind up with the straight go to jail card."