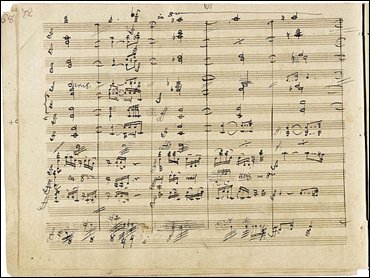 The final manuscript of Beethoven's Ninth Symphony, marked with the composer's revisions and insults to the copyist, sold for $3.47 million at auction Thursday.

The winning bid from an unidentified private buyer was at the lower end of Sotheby's pre-sale estimates.

The previous owner was a private foundation, which has not been identified. It reportedly plans to use the money to set up a charitable fund.

A single sheet of Beethoven's early draft of the opening of the Ninth Symphony sold last year for $2 million, eight times more than the estimated price.

That sheet was written in the composer's hand; the manuscript sold Thursday was made by a copyist. However, almost every one of the 575 pages has notes and revisions scrawled by Beethoven, according to Stephen Roe, Sotheby's head of manuscripts.

The notes and revisions range from minor adjustments to the tempo and rhythm of the symphony to entirely new sections pasted over previous work. These hidden pieces of music have never been published.

Beethoven was most vitriolic in the final choral section of the symphony, which extols freedom and the brotherhood of man. At one point he scribbled to the copyist, "du verfluchter Kerl!" ("you damned fool!")

The symphony was first performed in Vienna in 1824 — Beethoven had been deaf for at least eight years. It was met with wild acclaim, but failed to solve the composer's financial problems. Beethoven died three years later at age 57.

The record for a music manuscript is $4 million paid for a collection of Mozart symphonies sold at Sotheby's in 1987, Roe said.