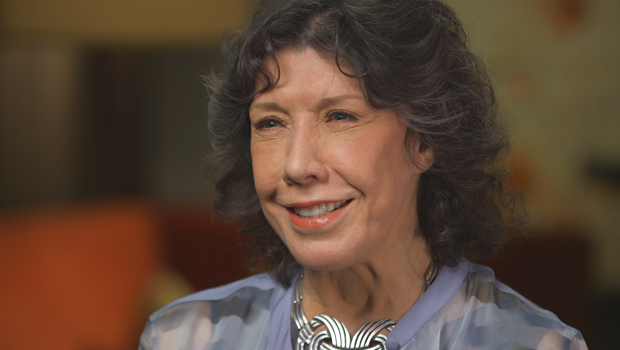 Lily Tomlin's gift for comedy is a gift she isn't at all sure she has. Lee Cowan has our Sunday Profile:

Cowan asked Lily Tomlin, "Do you think you're naturally funny?"

"Kind of, not terribly funny."

"No, I mean I think I'm somewhat funny."

Maybe the reason Lily Tomlin has such a hard time summing up her talent is because there's just so much of it. For more than half a century she's not only made people laugh, she's made people think, too.

"One thing that I have no worry about is whether God exists. It has occurred to me that God has Alzheimer's and has forgotten we exist."

Tomlin IS a national treasure, celebrated at the Kennedy Center Honors in 2014. If there's any doubt just how funny she is, just ask President Obama; whatever she whispered in his ear that night gave him a case of the Presidential giggles.

Cowan asked, "What did you say to him that cracked him up so much? Do you remember?"

"Well, you know, if I revealed it to you, it could throw the election!" she laughed.

She has so many awards, she can be forgiven if a few of them are a little worse for the wear, including her 1971 Grammy for Best Comedy Recording.

"My Grammy broke," she said. "They're not going to like that when they see this. It has to be soldered back on."

Her Tony Awards weren't in the best shape, either. ("I will fix them up for the next time I see you.")

Only thing missing is an Oscar, but perhaps not for long. At age 76, Tomlin's performance in the dramedy "Grandma" is getting some of the best reviews of her career.

Tomlin plays a grouchy lesbian poet who spends one eventful day wheeling around in an old car, trying to come up with enough cash to pay for her granddaughter's abortion.

Doesn't sound too funny, but it is.

She says she felt right at home in the role; in fact, she wore her own clothes. And that unwieldy '55 Dodge? Well, that's hers, too. "I just have to remember to press down hard on the brake," she explained.

It's fitting she's in love with a Detroit classic. After all, she grew up in the Motor City. She was born Mary Jean Tomlin. Lily was her mother's name.

Her working class neighborhood on the west side of Detroit became her comedic laboratory.

"The apartment house was like the center of my universe," she said. "I used to go and visit from one apartment to the next. Just mad about the people. Just wanted to hang out with 'em. Wanted to do what they were doing. And they would say to me, 'Don't you think you should go home?' It'd be nighttime, like 9:30 or something. And I'd say, 'No, no, I told my mother I was coming home late tonight!' That was my schpiel."

She had a keen sense of observation -- the tiniest gestures she could absorb and imitate.

Take Audrey Hepburn: "I read in a magazine that her eyes would move before her head would."

As good as her characters were, they weren't what most comedy clubs were looking for. But then came "Rowan and Martin's Laugh-In."

"Very few people, I don't think, can sort of pinpoint when they became famous -- but you can," said Cowan.

"I can," Tomlin said. "Ernestine was the culprit. And she's been mad about it ever since!"

Ernestine, the loveable yet nosey telephone switchboard operator, made Tomlin a household name:

"We may be the only phone company in town, but we sock it to everybody!"

"I first thought she would be just a tough Bronx operator. And then as I worked on this stuff and improvised and worked on material, I thought, my body just got tight like this, and her everything -- her face got tight, and then she would snort."

"I mean, just because your face is that way, you start to talk nasal?"

"Yeah, you talk that way. That's right. It all comes that way."

Then there was the particularly convincing five-year-old named Edith Ann:

"My little baby boy brother has a little soft spot on his head. You must be very careful not to touch it. So I took a ballpoint pen and made an X so I wouldn't touch it."

But we soon learned she could tackle the serious, too. Her touching portrayal of a married gospel singer with two deaf children in "Nashville" earned her an Oscar nomination for her first film role ever.

Tomlin doesn't just play characters; she becomes them. In her acclaimed one-woman show, "The Search for Signs of Intelligent Life in the Universe," Tomlin seamlessly floats between a dozen or more strange and wonderful oddballs.

"All my life I've wanted to be somebody. But I see now I shoulda been more specific."

"I wanted to reflect the culture. They all had a voice. Mostly I wanted to do the humanity."

Her characters' "humanity," she says, comes from her long-time creative partner, and now wife, Jane Wagner, who has written most of the material that Tomlin has been performing for decades.

In 1975 Tomlin says Time Magazine offered her the cover, as long as she agreed to come out publicly. She refused, not because she was hiding the fact she was gay; she just didn't like the ultimatum.

Two years later she made the cover of Time on her own terms, this time heralded as the new "Queen of Comedy."

Her longevity is a testament to her talent. She's currently co-starring and co-producing the Netflix series, "Grace and Frankie," with Jane Fonda.

"Jane and I wanted to do a project where we had a platform for older women," Tomlin said, "to talk about how discounted they are, and dismissed. I mean, Jane wrote a book about it in fact, about women of a certain age. 'Of a certain age.' Whatever that means!"

It's the first time they've worked together since the '80s smash, "9 to 5," a comedy about three secretaries who hatch plots -- real and imagined -- to wreak revenge on their sexist boss.

"I'm so glad I did it," Tomlin said. "My God, it was probably the only big-grosser movie I've ever been in. BIG grosser, you know?"

"Grandma" may not be a big-grosser, but 40 years after her first Oscar nod, she's wondering if it just might happen again.

Either way, she says she won't be arriving in that old Dodge of hers. We used up most of her gas anyway, so much so my producer called to find out just where we'd gone ...

"Tell him we're going to go to Tijuana for the weekend," Tomlin commanded.

What a road trip THAT would be -- although with all of Lily Tomlin's imaginary friends, you have to wonder if there'd be enough room in the car.

To watch a trailer for "Grandma," click on the video player below.