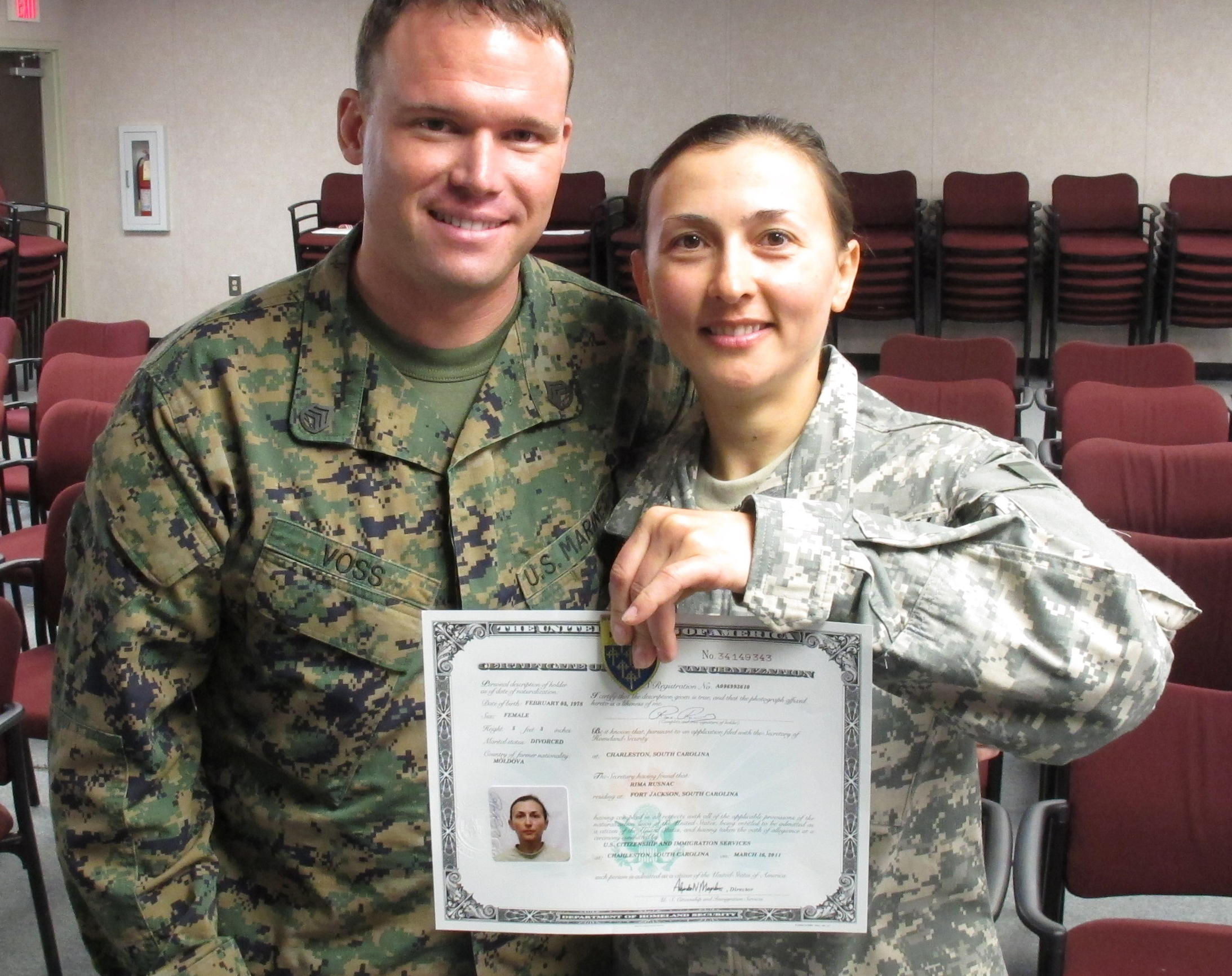 FORT JACKSON, S.C. - Military service has long been one route to U.S. citizenship. Now the Army and Navy, in need of specialists and language skills in wartime, are speeding things up by allowing recruits to wrap up the process while they're still in basic training.

It means a change in a no-visitors policy during boot camp, to allow federal immigration officers access to the recruits. But military officials say it's a well-deserved break for volunteers who otherwise would have to slog through the bureaucratic ordeal during deployments around the world, often far from U.S. embassies.

The military route is not a short-cut for foreigners abroad to get into the U.S. Only legal immigrants can apply, officials stress, and they must complete five years of honorable service or chance having their citizenship revoked.

"The moment the Soviet Union broke up, I decided America was the place for me to be," said Spec. Rima Rusnac, 33, of the former Soviet republic of Moldova, just after taking her oath of citizenship recently. "In America, I can exercise my full potential and be free."

Rusnac, who holds a college degree in English and German, was finishing boot camp at Fort Jackson, the Army's largest training installation. She was headed for further training as a combat medic at Fort Sam Houston in Texas, a skill that is at a premium because of the wars in Afghanistan and Iraq.

As she spoke, eight other soldiers from countries including Iran, Haiti, Australia and Bangladesh celebrated and showed friends and family their new citizenship papers, just a day before they were all due to graduate from their 10 weeks of Army basic training.

"In February alone, we took in more than 200 applications," said Karen Dalziel, an officer from Homeland Security's citizenship and immigration arm, who administered the oath to the soldiers.

Dalziel said she has been swearing in 30 to 50 soldiers on a weekly basis.

The terrorist attacks of Sept. 11, 2001, helped speed up citizenship for military recruits. President George W. Bush signed an executive order allowing a more compressed time frame because the nation was in a "period of hostilities." Before the change, military members had to serve one year of honorable service to even begin the sometimes-lengthy process of applying.

About 1,000 soldiers and sailors completed the citizenship process at basic training sites in fiscal year 2010, which ended Sept. 30. About 660 have been able to complete it in the first six months of this fiscal year, said Chris Rhatigan, a spokeswoman for the U.S. Citizenship and Immigration Services in Washington.

Of course, some applicants had begun their work toward citizenship papers years ago. Overall, the government granted citizenship to 11,146 service members in fiscal 2010. Between September 2001 and the first part of the 2011 fiscal year, some 68,974 members of all service branches have become citizens, the agency says.

Men and women from other nations are critical to America's defense, military and government officials say, because of the special language, education or job skills they have. Applicants must meet all the criteria for citizenship, including passing all security clearances and tests.

According to a U.S. Army Training and Doctrine Command document outlining the new program that was made available to The Associated Press, the Army and the immigration service are cooperating "to expedite citizenship processing for all non-citizen Soldiers."

"Receiving citizenship as early as possible benefits the Soldier by opening up additional MOS (enlisted jobs, or military occupation specialty) options. Deployed commanders on the ground also benefit as they often require Soldiers with clearances which can only be granted to citizens," said the so-called tasking order outlining the program.

The change in policy that had barred most visitors during boot camp now allows the immigration department to dispatch officers to the military posts to help applicants complete the often-complicated process.

"We take their fingerprints, their photos. We interview them, and see about their application and eligibility requirements. They take the U.S. government history test," said Dalziel.

Lt. Col. Brian Hernandez, who is in charge of about 1,100 recruits at Fort Jackson during each training cycle, said he's had 40 to 60 applicants for citizenship in every group he's commanded over the past 18 months. While in Iraq, he saw how difficult it was for the immigrant-applicants to get paperwork completed. Oftentimes, a file would just get lost and fail to follow the soldier from post to post.

"We had soldiers serving in the war, and they were trying to deal with a lengthy citizenship process, and deal with that while we were deploying," which also created difficulties for commanders because of their absences, Hernandez said.

Hernandez, who said his own father was an immigrant from Argentina, is fluent in Portuguese and Spanish. He said he was sent to South America for two years as a representative of the U.S. Army and believes it is important for the military to have soldiers from many cultures.

"We find ourselves involved in places that we've historically not been involved in. We may not have those language skills, so we need to bring in special people," he said, noting in particular the dearth of people in America able to speak Arabic or other Middle Eastern tongues.

Hernandez said he's had soldier-applicants from the Middle East, Africa, Latin America, Eastern Europe and Asia. "You are seeing it from across the globe," he said.

Translators he knew who were hired by the Army in Iraq and Afghanistan have come to the United States to enlist, Hernandez said. "And they go back, not only as U.S. soldiers, but as U.S. citizens," he said. "That's awesome."

During the basic training regime, recruits don't get any special time to study for their citizenship tests. They have to keep up with their 12 to 16-hour days of training, exercise and class work. If they fail, they can try again during advanced training, Hernandez said.

"My goal is to fight terrorists," said Army Spec. Shaheen Bahamin, 19, who fled Iran with his family and spent the last 11 years in California after some time in Pakistan, where he picked up a particular dialect spoken in both Iran and Afghanistan.

Terrorists, he said, "They are just power-hungry. In the Middle East, they would kill their own family. It could be my family they kill. That's what I'm here, to fight them."

Spec. Hamid Ennouri, a 26-year-old French-Moroccan fluent in Arabic, French, English and Spanish, is heading to training in logistics, using his languages to keep supplies flowing to troops stationed around the globe.

"American is the strongest country in the world," said the one-time Parisian, who said his college studies in law and international business couldn't help him find work. "I am interested in military intelligence work too, but I needed U.S. citizenship to get the security clearances," Ennouri said.

Pvt. Andrew Noble, of New Brunswick, Canada, said he applied for citizenship in order to become a pilot.

"I heard the fastest way to get pilot training was through the military," said the newly married 28-year-old, headed to repairing Blackhawk helicopters before he hopes to advance toward a flying job.

Lawrence Korb, who headed the Defense Department's personnel and logistics branch during the Reagan administration, said the military turns over tens of thousands of people annually, putting it on a constant search for talented members.

"The military is happy to have these people because they have a heck of a time getting enough qualified folks," said Korb, who is a senior fellow at the Center for American Progress in Washington, D.C.

"And to try to deal with the Embassy in Baghdad or Kabul, that's a nightmare," said Korb. "This makes a great deal of sense."