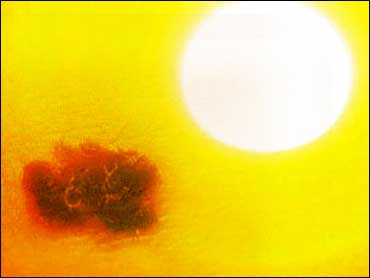 We all know that wearing sunscreen can help protect against skin cancer, but did you know that getting a haircut can, too?

The Early Show correspondent Tracy Smith found a salon in Atlanta that offers more than just a shampoo or style; it just may save your life.

Virginia Wright is a regular at Dass Salon in Atlanta, but if it wasn't for a routine appointment a few years ago, she might not be alive right now.

Wright says, "Don Shaw was cutting my hair and Doneille his daughter came up behind us and said, 'Go see your dermatologist!'"

She'd seen a mark on the back of Wright's neck that looked like melanoma skin cancer, a disease the Dass family knows all too well.

Ever since she was a little girl, fair-skinned Donielle Dass struggled with the sun, trying to tan, burning instead. By the time she married her husband, Tim, she'd given up on sunbathing. She helped build the family beauty business, and was quickly becoming one of the most popular stylists in Atlanta. When she found out she had malignant melanoma, Donielle was only 31 years old and 8 months pregnant.

Don Shaw says, "I guess I was like any father. When you hear cancer you just, you panic, absolute panic. And I kind of believed she would beat it."

And for a while, it seemed she just might. Donielle Dass hung on long enough to see her baby become a toddler, using the precious time she had to educate others.

Don Shaw says, "When she found out she had it, she didn't stop or pull up her hands or start screaming or crying. She really got her clients interested in it. She got her clients looking at themselves."

The reality is melanoma often strikes in places you don't even notice when you look in the mirror. Think about it: no matter how much you turn your head, you can't see the back of it, or behind your ears, or the nape of your neck. But your hairstylist can see them all.

Virginia Wright was one of many clients who took Donielle's advice to see a doctor, and thankfully, she was able to catch the cancer before it spread.

Don Shaw says, "She went around and was grabbing everyone and giving them a bear hug and saying,'Thank you for saving my life.'"

But Donielle Dass wasn't as lucky. In early 2003, her fight with cancer ended.

So remarkably, the family decided to turn the loss of their daughter into a mission to fight melanoma, one head at a time.

With the help of doctors, they started training all of their employees to literally go over each customer with a fine-tooth comb, looking for anything abnormal on the skin.

They also give their clients cards so they can learn the ABCD's of skin cancer: Assymetry, Border, Color and Diameter.

Dermatologist Dana Sachs says a program like this can make her job a lot easier.

"I think it's a terrific idea," she says, "Timing is very important. Caught early most skin cancer is curable."

In about a year and a half, Dass employees have caught 31 cases of melanoma in men and women of all ages that might have otherwise been overlooked.

And the Dasses can see their daughter's spirit everywhere: In her son, Julian, and in all the lives they've touched and saved, thanks to Donielle.

Don Shaw says, "I honestly believe that she was chosen for us to spread the word throughout our industry to help people stay alive."

Dermatologists say that even if you don't go to a salon where they're trained to look for melanoma, you can take the initiative and ask your stylist to check your scalp, ears and neck for any abnormal marks.