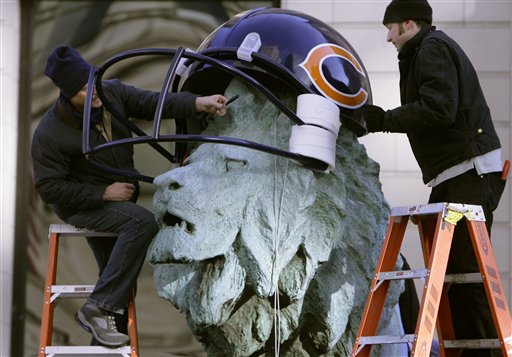 An effort to honor the NFC Champion Chicago Bears hit a snag Tuesday morning when a huge football helmet broke as it was being placed on one of the lion statues that stands guard outside the Art Institute of Chicago.

It seems the frigid weather, often referred to as Bears weather in Chicago, may have been to blame.

"They're made of Fiberglas and (one) broke," said Art Institute spokesman Chai Lee.

Some theorize the broken helmet had nothing to do with the weather at all.

"I think the lions got swelled heads since we won," joked Gary Heitz, project manager for Chicago Scenic Studios Inc., the company that made the helmets.

Heitz said workers took the helmets back to their workshop, where they will be enlarged and refinished in time to place them on the lions on Wednesday.

As for the lions, they're accustomed to such attention. During the holidays, they're adorned with wreaths, and when the White Sox went to the World Series in 2005, they were fitted with helmets.

Heitz said his company also made those helmets, but the job was easier because they just sat atop the lions' heads. The football helmets, equipped with face guards, must be fitted on the statues' heads, he said.

The lions have worn Bears helmets before _ when the 1985 Bears went to the Super Bowl. But these helmets much more involved than the ones made back then by an art institute student, Heitz said.

"Those were upside down Weber grills," he said.