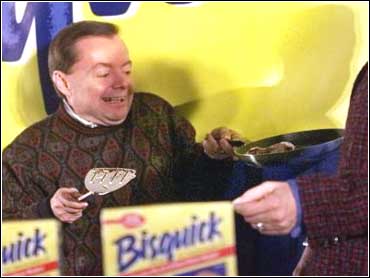 As a small crowd watched, GOP presidential contender Gary Bauer flipped a pancake into the air, followed it with his eyes and tried to catch it with his griddle, moving back, back, back.

He backed right off the stage, disappearing through a blue curtain.

His griddle pan was bent and his face turned beet-red, but Bauer was unhurt. Aides rushed to help him climb back through the curtain onto the low stage, and his second attempt at flipping and catching a pancake was successful.

Bauer, a conservative activist who trails in the polls, followed Republican front-runner George W. Bush on stage at the event.

Bush flipped his pancake high into the air and caught it on a spatula, undeterred by a group of political hecklers.

All of the candidates were invited, but by midmorning only Bush and Bauer had shown. Alan Keyes, whose post-Iowa caucus "crowd surfing" drew criticism from Bauer, was an especially notable absence.

Bauer came on stage joking that Bush had a string attacked to his pancake, then said millionaire publisher Steve Forbes couldn't make it because "he was across town at a Faberge egg scrambling contest." But his fall drew the most laughs.