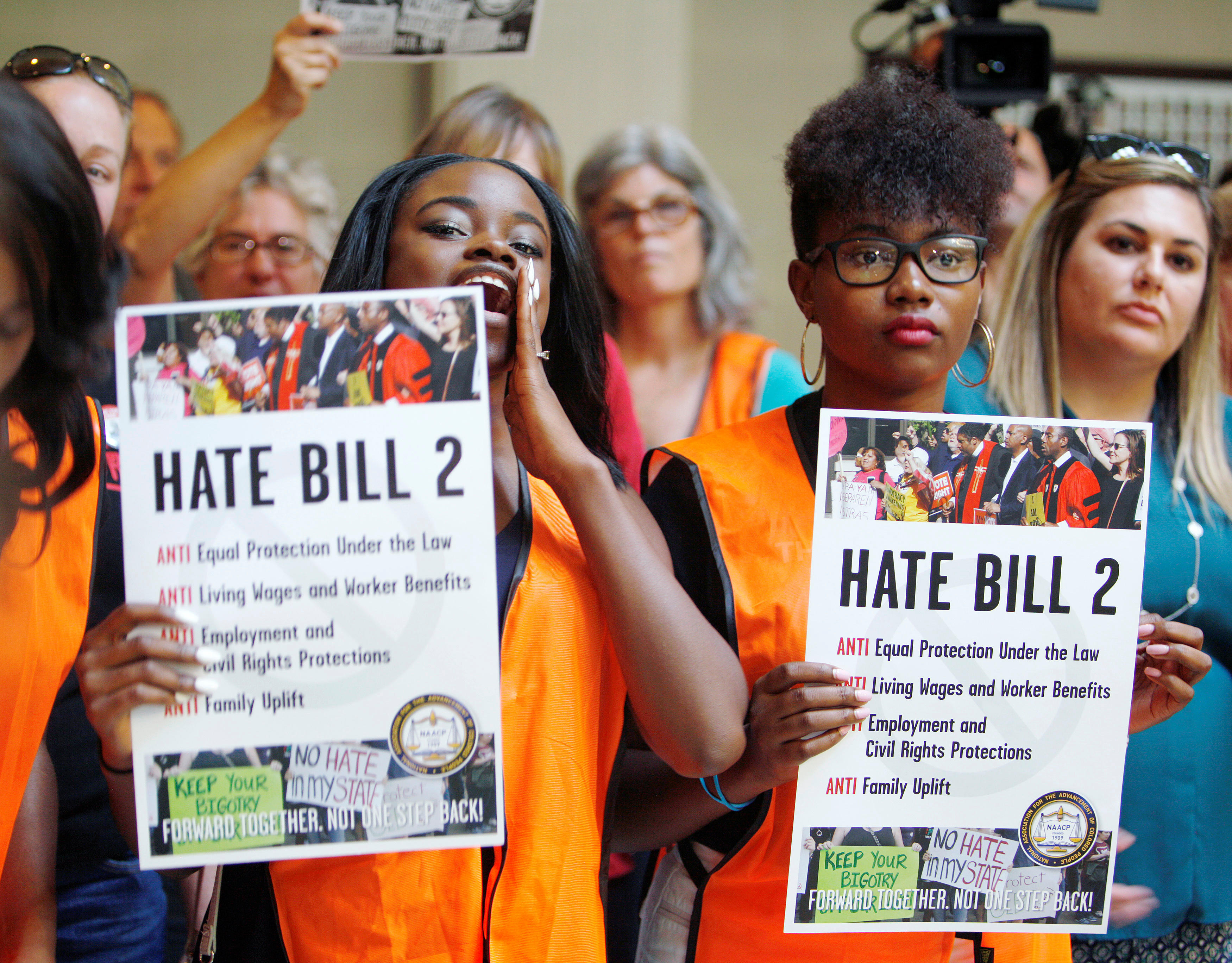 Despite assurances from former North Carolina Republican Governor Pat McCrory that its “bathroom bill” wouldn’t hurt its economy, the state’s losses are mounting.

The law limiting LGBT protections will cost the state more than $3.76 billion in lost business over a dozen years, according to an Associated Press analysis. The bill, passed a year ago, requires people to use the bathroom that corresponds with their gender at birth. The backlash was immediate, with companies backing out of planned projects and conventions.

Over the past year, North Carolina has suffered financial hits ranging from scuttled plans for a PayPal facility that would have added an estimated $2.66 billion to the state’s economy to a canceled Ringo Starr concert that deprived a town’s amphitheater of about $33,000 in revenue. The blows have landed in the state’s biggest cities as well as towns surrounding its flagship university, and from the mountains to the coast.

North Carolina could lose hundreds of millions more because the NCAA is avoiding the state, usually a favored host. The group is set to announce sites for various championships through 2022, and North Carolina won’t be among them as long as the law is on the books. The NAACP also has initiated a national economic boycott.

The AP analysis - compiled through interviews and public records requests - represents the largest reckoning yet of how much the law, passed one year ago, could cost the state. The law excludes gender identity and sexual orientation from statewide antidiscrimination protections, and requires transgender people to use restrooms corresponding to the sex on their birth certificates in many public buildings.

Still, AP’s tally is likely an underestimation of the law’s true costs. The count includes only data obtained from businesses and state or local officials regarding projects that canceled or relocated because of HB2. A business project was counted only if AP determined through public records or interviews that HB2 was why it pulled out.

Some projects that left, such as a Lionsgate television production that backed out of plans in Charlotte, weren’t included because of a lack of data on their economic impact.

The AP also tallied the losses of dozens of conventions, sporting events and concerts through figures from local officials. The AP didn’t attempt to quantify anecdotal reports that lacked hard numbers, or to forecast the loss of future conventions.

Bank of America CEO Brian Moynihan - who leads the largest company based in North Carolina - said he’s spoken privately to business leaders who went elsewhere with projects or events because of the controversy, and he fears more decisions like that are being made quietly.

“Companies are moving to other places because they don’t face an issue that they face here,” he told a World Affairs Council of Charlotte luncheon last month. “What’s going on that you don’t know about? What convention decided to take you off the list? What location for a distribution facility took you off the list? What corporate headquarters consideration for a foreign company - there’s a lot of them out there - just took you off the list because they just didn’t want to be bothered with the controversy? That’s what eats you up.”

Other measures show the country’s ninth most populous state has a healthy economy. By quarterly gross domestic product, the federal government said, North Carolina had the nation’s 10th fastest-growing economy six months after the law passed. The vast majority of large companies with existing operations in the state - such as American Airlines, with its second-largest hub in Charlotte - made no public moves to financially penalize North Carolina.

Shortly after he signed the law, Republican then-Gov. Pat McCrory issued a statement assuring residents it wouldn’t affect North Carolina’s status as “one of the top states to do business in the country.”

HB2 supporters say its costs have been tiny compared with an economy estimated at more than $500 billion a year, roughly the size of Sweden’s. They say they’re willing to absorb those costs if the law prevents heterosexual predators posing as transgender people from entering private spaces to molest women and girls - acts the law’s detractors say are imagined.

Lt. Gov. Dan Forest, one of the strongest supporters, accused news organizations of creating a false picture of economic upheaval. A global equestrian competition that’s coming to North Carolina in 2018 despite HB2 is projected to have an economic impact bigger than the sporting events that have canceled, Forest said. The Swiss-based group behind the event estimated its spending poured about $250 million into the French region of Normandy the last time it was held - 2014. The organization said the figure came from a study by consulting and accounting firm Deloitte, but the Federation Equestre Internationale declined to release the report.

Forest declined a request for an interview based on AP’s analysis.

“The effect is minimal to the state,” Forest told Texas legislators considering a similar law. “Our economy is doing well. Don’t be fooled by the media. This issue is not about the economy. This issue is about privacy, safety and security in the most vulnerable places we go.”

But AP’s analysis shows the economy could be growing faster if not for projects that have already been canceled.

Those include PayPal canceling a 400-job project in Charlotte, CoStar backing out of negotiations to bring 700-plus jobs to the same area, and Deutsche Bank scuttling a plan for 250 jobs in the Raleigh area. Other companies that backed out include Adidas, which is building its first U.S. sports shoe factory employing 160 near Atlanta rather than a High Point site, and Voxpro, which opted to hire hundreds of customer support workers in Athens, Georgia, rather than the Raleigh area.

“We couldn’t set up operations in a state that was discriminating against LGBT” people, Dan Kiely, Voxpro founder and CEO, said in an interview.

All told, the state has missed out on more than 2,900 direct jobs that went elsewhere.

Supporters are hard-pressed to point to economic benefits from the law, said James Kleckley, of East Carolina University’s business college.

An analysis by the state Commerce Department shortly before HB2 was enacted shows state officials expected the PayPal expansion to contribute more than $200 million annually to North Carolina’s gross domestic product - an overall measure of the economy. By the end of 2028, the state expected PayPal to have added $2.66 billion to the state economy.

The same analysis of the Deutsche Bank project estimated a total impact of about $543 million by the end of 2027. The economic model has been used for more than a decade - with some updates along the way - when the state offers major discretionary tax breaks to attract jobs.

State officials said they didn’t run the same financial analysis for CoStar, Voxpro and Adidas, so losses attributed to them were calculated using payroll numbers and other figures from the companies or state documents.

Meanwhile, canceled conventions, concerts and sporting events ranging from the NBA All-Star Game to a Bruce Springsteen show have deprived the state of more than $196 million. The number was compiled through email exchanges and interviews with local tourism officials.

All told, the state will have missed out on more than $3.76 billion by the end of 2028. The losses are based on projects that already went elsewhere - so the money won’t be recouped even if the law is struck down in court or repealed.

Tourism officials in several cities say the numbers they report represent only a fraction of the damage the law has done. They typically track large conventions but don’t have firm numbers for when groups or tourists cancel smaller deals - or rule out North Carolina before booking.

“The biggest impact is how many times our phones are not ringing now,” said Shelly Green, CEO of the Durham Convention & Visitors Bureau.

When Green’s bureau sought to tally cancellations, it was able to count several large sporting events and conventions that backed out, depriving the city of more than $11 million, she said. But officials found hotels and meeting planners were tight-lipped about other events.

“There are a lot more meetings that have canceled, but we don’t have data on them,” she said.

Elsewhere, tourism setbacks range from an estimated $100 million lost when the 2017 NBA All-Star Game moved out of Charlotte to $36,000 in spending taken elsewhere when the Lutheran Financial Managers Convention backed out of Fayetteville. Seven hundred part-time workers at Raleigh’s PNC Arena lost at least $130,000 in wages because of cancellations by Pearl Jam, Cirque Du Soleil and others.

Other financial signals of disapproval have been more symbolic than clearly harmful.

More than two dozen cities and states, from Honolulu to Vermont, have banned taxpayer-funded visits to North Carolina because of HB2. Most said they couldn’t estimate the money not spent on business travel. But in Providence, Rhode Island, officials refused to spend even the remaining $495 to send three city employees to a Charlotte conference after sponsors picked up most of the costs, city spokesman Victor Morente said via email.

Dozens of investment firms have urged North Carolina to repeal HB2, but most of those contacted in recent weeks, such as John Hancock and Morgan Stanley, wouldn’t discuss any financial measures they took to penalize the state. Trillium Asset Management, which manages more than $2 billion for wealthy families and foundations, had dozens of clients request that their holdings exclude bonds issued by North Carolina state or municipal governments, Chief Executive Officer Matt Patsky said in an interview.

What impact did selling off several million dollars of municipal bonds have? Impossible to measure, Patsky said.

In September, despite the law, Asheville’s Chamber of Commerce announced that biotech company Avadim was adding 550 jobs. Local officials call it the biggest single job creator in area history.

But HB2 jeopardized another project of similar size for the left-leaning mountain city. Chamber CEO Kit Cramer said last year that another company considering bringing 500 technology jobs was balking because of HB2, adding: “That’s a loss that would be incredibly hard to swallow.” Cramer said in an email in March that the company hasn’t made a decision. She didn’t give further details; that potential loss wasn’t included in AP’s count.

Charlotte, North Carolina’s largest city, has lost projects totaling 2,000 jobs because of HB2, Chamber of Commerce research director Chuck McShane said in an email. According to separate documents obtained through public records requests, the majority were in the PayPal and CoStar projects.

CoStar, a real-estate research firm, was entering final negotiations to bring 732 jobs to Charlotte in September when its board backed out because of negative publicity over HB2, according to an email between a chamber executive and a city official. When the company picked Virginia, the reversal cost North Carolina at least $250 million in economic impact over the next six years, according to figures from both states.

“I fear this will be an epidemic outcome for many projects we are still in the running for at this time,” Jeffrey Edge of the Charlotte Chamber wrote in the September email exchange first reported by The Charlotte Observer.

Economic losses also hit smaller towns, such as those surrounding the University of North Carolina. When the San Francisco Symphony pulled out of two concerts scheduled for April 2017, the move had a ripple effect totaling about $325,000, according to Patty Griffin, of the Chapel Hill/Orange County Visitors Bureau.

“Memorial Hall will be empty those two nights and see no revenue for tickets or concessions, and no employees will work,” she said via email. “The attendees for most of them who have dinner, drinks and desserts either before or after the performance will not come out, which impacts local restaurants.”

Green, the Durham tourism official, said, “When you think about it, this whole thing is just such a Dumpster fire, and nobody wants to go near it.”

Meet the 8 men who are wealthier than half the globe