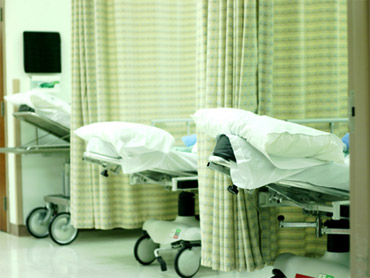 A second study found the antiseptic did a better job of preventing infections than the reddish-brown iodine solution that's been used for decades to swab the skin before an operation.

Infections are a vexing problem for hospitals. Some 30 million surgical procedures are done each year, and up to a half million Americans develop surgical-site infections, mostly from staph bacteria.

While attention has been focused on ways to stop health care workers from spreading bugs, patients can also contaminate themselves with the germs they harbor in their noses or on their skin.

"A lot of people think it's all from the outside world, but these are your own germs," said Dr. Robert Weinstein, an infectious disease expert at Cook County's Stroger Hospital in Chicago.

Two new studies, published in Thursday's New England Journal of Medicine, tried different approaches to killing those bacteria to see if that reduced the number of post-surgery infections.

U.S. researchers tested a newer antiseptic against the iodine solution commonly used to prep surgery patients and found it cut all surgical-site infections by 40 percent. The study's leader, Dr. Rabih Darouiche, of the Michael DeBakey VA Medical Center in Houston, and other experts expect the newer antiseptic to replace iodine.

In the Netherlands, where the newer antiseptic prep is already used, researchers screened patients and treated those who had staph bacteria to see if there was any additional benefit. Treatments with nasal ointment and antiseptic baths reduced staph infections by nearly 60 percent compared to dummy treatments.

"This is the single most effective way of preventing surgical-site infections," said researcher Dr. Henri Verbrugh of the Erasmus University Medical Center in Rotterdam.

The Dutch researchers and others had tested the staph-killing ointment before with mixed results. They attribute the positive outcome to the development of a rapid screening test, the addition of the antiseptic bath and continuing the treatment for five days.

The study was done at five hospitals in the Netherlands and involved 917 mostly surgical patients who tested positive for staph bacteria when they were admitted. They were treated with either mupirocin ointment twice daily and daily baths with antiseptic chlorhexidine soap or dummy ointment and soap.

Over the next six weeks, about 3 percent of the treated group had staph infections compared to about 8 percent in the dummy treatment group. The treatment also cut average hospital stays by two days.

The U.S. study at six hospitals included 849 patients who were having surgeries with a moderate risk for infection. The incision area was cleaned with either the iodine scrub or a mixture of chlorhexidine and alcohol. A month later, the overall infection rate in the chlorhexidine group was about 10 percent compared to 16 percent for iodine.

Darouiche said the two preps both work against a variety of germs but the newer blue-tinted antiseptic works quicker and longer. It costs more - on average $12 vs. $3 for the iodine prep - but Darouiche said the expense is outweighed by the thousands saved by preventing costly infections.

Dr. Richard Wenzel, who wrote an editorial on the studies, said the U.S. research supports switching antiseptics. But he said the pre-surgery screening should be for those at higher risk of infection, including patients having heart surgery or getting an implant.

Wenzel, of Virginia Commonwealth University in Richmond, Va., said patients can play a role by asking about infection rates connected with their hospital and doctor. Prevention guidelines call for patients to get antibiotics right before surgery and for hair to be clipped, not shaved.

The two studies "offer remarkably safer strategies for all patients who require surgery," he wrote.

The U.S. study was funded by CareFusion Corp., formerly part of Cardinal Health Inc., which makes the antiseptics tested. The researchers report getting grants and consulting fees from the company, and one is a company employee. The Dutch study was funded by a number of drugmakers; some of the researchers receive advisory board and lecture fees from them.