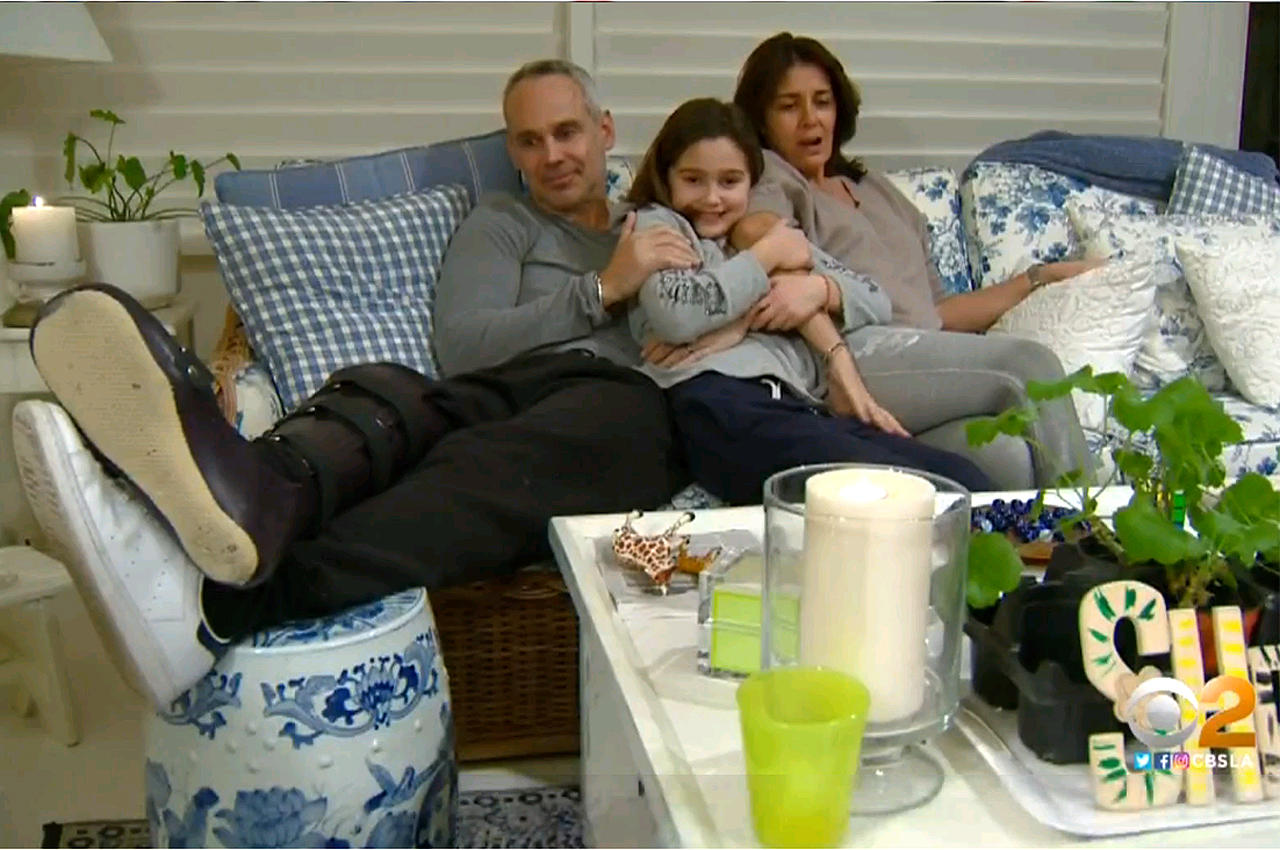 One year ago, Greg Krentzman, an American from Culver City, California, was visiting Nice, France, with his wife Sophie and daughter Lola.  They went to the Promenade des Anglais, the main street that winds along the French Riviera coast, to see the Bastille Day fireworks.

Krentzman and his daughter narrowly escaped death when a terrorist drove a truck through a crowd of families and strollers, killing 86 people and leaving 400 more wounded.

"It all happened so fast," he told CBS News. "We were about to go back home after a nice walk outside. It was a beautiful night and we were all still looking up at the sky, the stars, after the fireworks ended and then – zap – our whole life changed in an instant, from feeling secure, to survival."

What followed for Krentzman has been harrowing. He stayed in a Nice hospital for six months. One of his legs was shattered, with 12 fractures, and doctors came close to amputating it. His foot was smashed.  Since then, he has been through seven operations and is currently recovering from a skin graft.

The night of the attack, just as the fireworks ended, Greg heard Sophie yell to him and his daughter to get out of the way of a zigzagging truck. He managed to jump, but the truck clipped one leg and broke Lola's ankle.

CBS News met Krentzman at the Pasteur Hospital in Nice three weeks after the attack, and caught up with him again by phone on the anniversary of the bloodshed.

He was in the hospital and at two separate clinics until January, when he finally returned home to Beverly Hills. Today, he is continuing physical therapy and will likely need additional skin grafts.

Greg, Sophie and Lola were invited to join French President Emmanuelle Macron for Bastille Day events this year in Nice, after Macron attended a parade in Paris with visiting President Trump and First Lady Melania Trump at the Champs-Élysées.

Sophie, Greg's wife, is a native of Nice and is back in the city with Lola for the summer. They were unsure at first if they wanted to revisit a crowded event where the attack occurred. Greg, who is in Los Angeles, has been back once, but said he would not return for the event, at least not for another year.

On the anniversary of the attack, he talked about the commitment to security iterated this week by Presidents Trump and Macron. "I am hopeful," he said, "that they both seem to really want to fight terrorism."

At a joint news conference on Thursday, Macron and Mr. Trump talked about the terror attacks in Nice, saying they would "renew our resolve to stand united against these enemies of humanity and to strip them of their territory, their funding, their networks, and ideological support."

"I believe that the discussions that we've had today is the proper answer to terrorism," Macron said.

On the local level, there is indeed cooperation, and the multiple terror attacks in France have put counterterrorism high on the U.S.-French agenda.

"Our man in Paris is a detective sergeant who started here (in New York) in the First Precinct, and is now the NYPD's police liaison to the Prefecture of Police in Paris, in their operation center… and plugged in -- and we're getting real-time information." There is also a French police officer in New York, he told CBS News.

Nice's Deputy Mayor Rudy Salles, who spoke to CBS News in the weeks following the attack, said on Thursday that his city must now focus on the victims and their families: "Bastille Day will be a day of memory, so that we never forget what happened."

Salles said many tourists had returned to the city this year to show their love on the tarnished national holiday. "This is the best answer to give to the terrorists," he said.

Krentzman, as a survivor, is optimistic, but said that if he were in Nice right now, he's not sure whether he'd be comfortable attending the events Macron has planned: "I am still nervous about attending any event with a big crowd."

He said his daughter Lola, who was just 9 years old at the time of the attack -- and all of the family-- have suffered psychologically since the attack.

"She doesn't remember much, she went into shock," Krentzman said of his daughter, adding that she, too, remains "anxious about crowds" and continues to have "bad dreams."

Before the attack, Krentzman was athletic -- a former professional racquetball player. Now he has limited mobility, $100,000 of debt for medical treatment and related-expenses, and a daughter who just "wants us to go back to the days when we can play sports together."