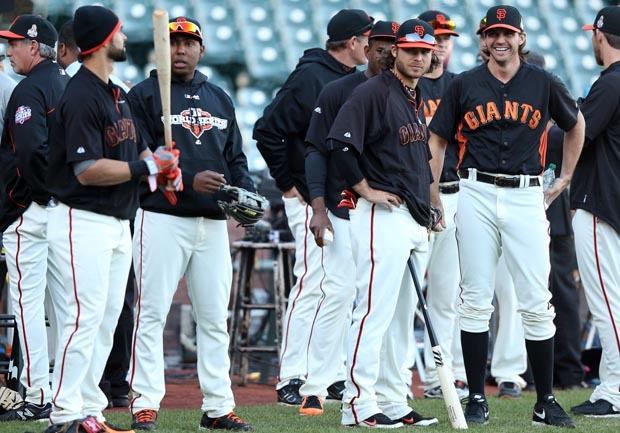 SAN FRANCISCO Best in baseball? The Detroit Tigers and San Francisco Giants spent much of the season just trying to catch mediocre teams like the Chicago White Sox and Los Angeles Dodgers just to win their divisions.

Those up-and-down regular seasons are distant memories now that the Giants and Tigers have raced through the playoffs and are getting ready for Game 2 of the World Series in San Francisco on Thursday night.

The Giants trailed the Los Angeles Dodgers in the NL West as late as mid-August before making a strong run to win the division and finish tied with the third-best record in the National League. They won six consecutive elimination games this postseason and Game 1 of the World Series.

"Some things you can't explain. At the moment, the San Francisco Giants qualify as one of those things," writes CBSSports.com's Jon Heyman.

The Tigers were merely six games over .500 with three weeks left in the regular season and made the playoffs despite posting the seventh-best record in the American League.

"You know what, I think these are the best two teams and the hottest teams, too," Tigers reliever Jose Valverde said. "The first two months, you see Detroit is in last place. Chicago, Cleveland, everybody's laughing. What happened now?"

For much of its history, baseball was a grueling, six-month endurance test, with only the top team in each league going to the postseason.

Now, with six divisions and four wild-card teams, it's more a matter of just getting into the tournament and getting on a roll in October.

"I think ideally you like to see the teams that have the best record end up there," Giants manager Bruce Bochy said. "But as we have mentioned many times, once you get to the playoffs it does become a little bit of a crap shoot, who's playing the best at that time. You understand that. That's why wild-card teams have done well. A lot of them are fighting to get there, but they're also playing well at the right time."

Both the Giants and Tigers got in as division winners but they were not the top teams in their leagues over the 162-game haul.

Washington finished with baseball's best record this year with 98 wins but fell in the division series to the 88-win St. Louis Cardinals, who won it all the previous year as a wild-card team. The Cardinals won a one-game playoff under the new wild-card format just to get to the divisional series.

Detroit, with 88 wins, finished behind the other four AL playoff teams, as well as the Los Angeles Angels and Tampa Bay Rays despite playing in the AL's weakest division. But the Tigers knocked off AL West champion Oakland in the first round and swept the New York Yankees, who had the AL's best record, in the league championship series.

"You just need to get hot like the Cardinals did last year," Tigers outfielder Don Kelly said. "You have to play your best baseball at the right time. But over the course of the year you have to keep yourself there, you have to keep yourself in it. You can't get too far behind. That's what we talked about a lot as a team. We just had to stay right there because we knew we could pull it out at the end."

No team had ever finished this low in its league and made it to the Series. The previous low was fifth, by three eventual World Series champions: Minnesota in 1987, the New York Yankees in 2000 and the 2006 St. Louis Cardinals, who beat the Tigers despite winning only 83 games in the regular season.

In the 18 postseasons since the playoffs expanded in 1995, the team with the best overall record in the regular season ended up as World Series champion just three times. The Yankees did it twice, in 1998 and 2009, and Boston accomplished it as well in 2007. That one out of six rate is little better than if the champion was chosen randomly.

More common is a case like the 2004 St. Louis Cardinals, who won 105 games in the regular season but were swept by wild-card winning Boston in the World Series.

"Being on a team in St. Louis in 2004, which was a team pretty much wire to wire was a pretty dominant team, nobody felt sorry for us at any point when we didn't pull it off in the World Series," said Cardinals manager Mike Matheny, a catcher the `04 runner-ups. "But you take your chances, when a team rolls like that. Typically you have enough there to win it all. It's just a matter of the timing and guys taking advantage of the opportunities."

This is not a phenomenon exclusive to baseball. The NFL and NHL playoffs have often been about determining which team is hottest come playoff time. The Los Angeles Kings won the Stanley Cup in June as an eight seed, the New York Giants were a No. 4 when they beat New England in the Super Bowl in February.

That wasn't the case in baseball during the pre-playoff days. The winner of the National League faced off each fall against the winner of the American League in the World Series. The team with the best record went 38-27 in those Series from 1903 through 1968, according to STATS LLC.

The postseason turned into a bit of a crap shoot once the league broke into divisions, allowing four teams to make the playoffs. The best regular season team won in seven of those 25 seasons before wild-cards were added in 1995.

"If you're asking me, even if it's not us, I always hope that the team that's had the best year, they end up battling to win the World Series," Bochy said. "But it's a great game how we have it set up."