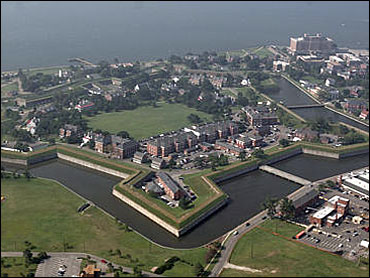 President Bush now must decide whether to accept a commission's proposal to close or reorganize some U.S. military bases, reject the plan altogether or send it back for more work.

The nine-member Defense Base Closure and Realignment Commission forwarded its final report to the president late Thursday after signing off on roughly 86 percent of what the Pentagon had recommended as it sought to save money by getting rid of extra space in the domestic military network.

That's on par with previous years, when commissions changed only about 15 percent of what the Pentagon proposed.

The report arrived at the White House only after the commission, in response to a federal judge's ruling, withdrew a recommendation that called for moving the 103rd Fighter Wing's jets from Connecticut's Bradley Air National Guard base to Massachusetts.

Connecticut was among a number of states that had gone to court seeking to stop the commission's plan.

More than 800 Army, Navy and Air Force facilities across the country will grow, shrink or close under the commission-amended proposal.

In May, the Pentagon had recommended closing 33 major bases. The panel approved 21 of those closures, but proposed scaling back forces at seven of those bases rather than shutting the doors entirely. In the most high-profile decisions, the panel decided to keep open five major bases the Pentagon wanted to scrap.

Copies of the report were being delivered Friday morning to Congress and the Defense Department.

Last month, the president, invoking the commission's nickname, told reporters: "in order for the process to be nonpolitical, it's very important to make it clear that the decision of BRAC will stand, as far as I am concerned."

But Mr. Bush still could reject the report altogether or send it back to the commission for more changes, although either of those options would open him up to criticism when his poll numbers are low and his administration is taking heat for its response to Hurricane Katrina.

Last week, Defense Secretary Donald H. Rumsfeld expressed reservations about the panel's decisions to keep several major bases open and said he was uncertain whether he would recommend that the president accept the proposed closures as modified by the commission.

After Congress receives the report from the president, lawmakers then will have 45 days to block it. The report will become law if the House and the Senate fail to pass a joint resolution objecting to it. That has never occurred in previous base-closing rounds.

On a day filled with a flurry of legal maneuvers by states hoping to save their bases targeted for closure, federal judges in Tennessee and Connecticut had blocked the panel from relocating units at local Air National Guard bases.

But the Connecticut injunction stood. U.S. District Judge Alfred V. Covello found that the governor would suffer significant hardship if the state's lawsuit over the Bradley Air National Guard Base wasn't considered immediately.

Supreme Court Justice Ruth Bader Ginsburg rejected the Bush administration's request for intervention in the Connecticut case. The administration contends the panel's recommendations are not reviewable by courts.

Ginsburg, a Clinton appointee who handles appeals from the 2nd U.S. Circuit Court of Appeals, said a federal appeals court in New York was dealing with the Connecticut case and "this court should not short-circuit the normal review process absent a showing of irreparable harm stronger than that presented here."

That prompted the commission to strike the section covering the Bradley Air National Guard base in Connecticut just hours before sending the report to the president. The commission said it would restore the recommendation if the Connecticut court's injunction "is later vacated, reversed, stayed or otherwise withdrawn."