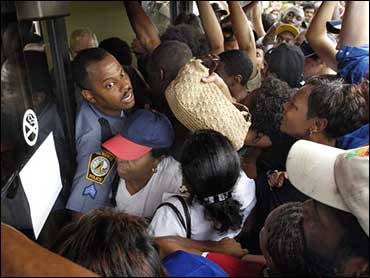 A rush to purchase $50 used laptops turned into a violent stampede Tuesday, with people getting thrown to the pavement, beaten with a folding chair and nearly driven over. One woman went so far as to wet herself rather than surrender her place in line.

"This is total, total chaos," said Latoya Jones, 19, who lost one of her flip-flops in the ordeal and later limped around on the sizzling blacktop with one foot bare.

An estimated 5,500 people turned out at the Richmond International Raceway in hopes of getting their hands on one of the 4-year-old Apple iBooks. The Henrico County school system was selling 1,000 of the computers to county residents. New iBooks cost between $999 and $1,299.

Officials opened the gates at 7 a.m., but some already had been waiting since 1:30 a.m. When the gates opened, it became a terrifying mob scene.

People threw themselves forward, screaming and pushing each other. A little girl's stroller was crushed in the stampede. Witnesses said an elderly man was thrown to the pavement, and someone in a car tried to drive his way through the crowd.

"It's rather strange that we would have such a tremendous response for the purchase of a laptop computer — and laptop computers that probably have less-than- desirable attributes," said Paul Proto, director of general services for Henrico County. "But I think that people tend to get caught up in the excitement of the event — it almost has an entertainment value."

Blandine Alexander, 33, said one woman standing in front of her was so desperate to retain her place in line that she urinated on herself.

"I've never been in something like that before, and I never again will," said Alexander, who brought her 14-year-old twin boys to the complex at 4:30 a.m. to wait in line. "No matter what the kids want, I already told them I'm not doing that again."

Jesse Sandler said he was one of the people pushing forward, using a folding chair he had brought with him to beat back people who tried to cut in front of him.

"I took my chair here and I threw it over my shoulder and I went, 'Bam,"' the 20-year-old said nonchalantly, his eyes glued to the screen of his new iBook, as he tapped away on the keyboard at a testing station.

"They were getting in front of me and I was there a lot earlier than them, so I thought that it was just," he said.