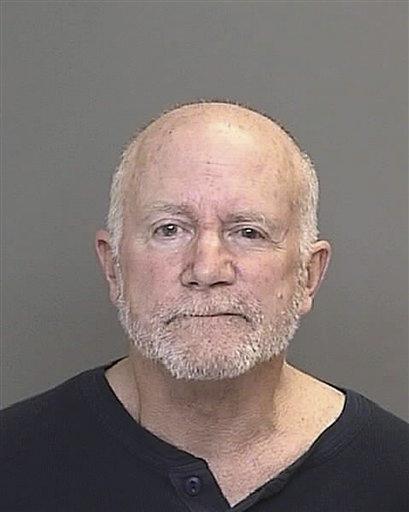 DETROIT (AP) - Hours before his arrest outside a popular Detroit-area mosque, a 63-year-old California man held court at a nearby sports bar, telling an employee that he was a Vietnam veteran-turned Muslim holy warrior, that he planned to set off a "big explosion," and that he was "going to be part of making history," the employees said Monday.

Joe Nahhas, an operations manager at the J.S. Fields bar in Detroit, told The Associated Press that a man identified after his arrest as Roger Stockham ordered a double-Scotch on the rocks on Jan. 24 and told him he planned to cause an explosion that would be "here, there, the mosque." Stockham - who is bipolar and suffers from other psychiatric disorders, according to an attorney who represented him in a previous case - was wearing a Vietnam War veteran hat and said he is a Muslim and a member of an Indonesian mujahedeen group, Nahhas said.

Nahhas said he called 911 to report the incident, and police have said a tip preceded Stockham's arrest near the Islamic Center of America in neighboring Dearborn a few hours later. Police said when officers pulled over Stockham's car, he was wearing a ski mask and traveling with open alcohol containers, spray paint and more than two dozen powerful fireworks, including M-80s, which are illegal in Michigan.

"He stated over and over there's going to be a big explosion in the city tonight," said Nahhas, whose bar is down the street from the mosque, one of the largest in North America. "My honest belief is he was having a celebration before hurting people."

Stockham was arraigned Wednesday on one count of making a false report or threat of terrorism and one count of possessing explosives with an unlawful intent. He remained jailed Monday on a $500,000 bond. A preliminary examination is scheduled for Friday.

Police said they don't know if Stockham has an attorney, and a public records search did not turn up a listed number for Stockham, though Dearborn Police Chief Ronald Haddad said he lives in Imperial Beach, near San Diego.

Haddad said Sunday that authorities believe Stockham was acting alone and that they take him "very seriously."

The fireworks, as described by police, could not have destroyed a building, but they could have been used to wound or kill people, said John V. Goodpaster, an explosives expert and assistant professor at Indiana University-Purdue University Indianapolis who worked for several years for the Bureau of Alcohol, Tobacco, Firearms and Explosives.

Mourners had gathered for a funeral at the Dearborn mosque the night of Stockham's arrest.

A single M-80 that explodes in a person's hand can blow off fingers or the entire hand. Goodpaster described it as "not terribly difficult" to get more than one M-80 to explode at the same time. "That would be enough to be lethal," Goodpaster said. "The lethality would depend on where they were placed and where the people are relative to the blast."

"If you get enough of them in one place, it can be pretty impressive," Goodpaster said. "It can destroy a car if you have a box full of M-80s."

Court documents in Vermont show Stockham pleaded not guilty by reason of insanity to charges stemming from threats made in 2002 against the U.S. president and against veterans' facilities in that state. Stockham was charged after officials say he threatened employees at a Veterans Administration hospital in White River Junction, Vt., and at a veterans' center in South Burlington, Vt. He allegedly threatened to murder the president - who at the time was George W. Bush - saying he was going to "whack the bastard."

According to Thomas Zonay, an attorney who represented him at the time, Stockham was committed for a psychiatric examination at the U.S. Medical Center for Prisoners in Springfield, Mo., for four months in 2005 and was found to have bipolar disorder, post-traumatic stress disorder and personality disorder. The U.S. Bureau of Prisons says Stockham was released from custody that year.

Nahhas described Stockham as "intelligent," "serious" and "jubilant." He spoke a few words of Arabic to Nahhas, who is a Lebanon native and speaks Arabic. He said he set up a laptop computer in the bar and told employees he was writing letters to be sent to the media after the explosion.

"He said, 'I am having magical moment, a historical moment. I am going to be part of making history,'" Nahhas said.

Chief Haddad said he called the Islamic Center's leader early Tuesday to let him know of the arrest. He later met with Imam Hassan al-Qazwini and mosque board members, who he said shared concerns about copycat crimes if the arrest was publicized, and Haddad said he understood.

"We never want to put something out there that gives someone the 'how-to,'" Haddad said.

Qazwini informed worshippers about the incident during his sermon Friday. The Council on American-Islamic Relations' Michigan chapter issued a news release Saturday night and the police followed Sunday morning.

Landon Debono, a 24-year-old Navy veteran who was neighbors with Stockham in Imperial Beach, said Stockham put forth a happy front but seemed troubled.

"I think he suffered from PTSD," said Debono.

Debono said Stockham moved out three or four weeks ago, saying something about being in trouble.

He said Stockham kept to himself, and has a scar on his neck from a suicide attempt almost a year ago. Debono said he was friends with Stockham's ex-girlfriend, and that he would see Stockham regularly at the local Veterans of Foreign Wars bar.

"He was always at the bar," he said. "He was a very likable, good guy. I wouldn't think he'd be capable of doing something like this. It's pretty trippy, kind of weird he was living right there. I never thought him to be a violent person."

The CAIR group in San Diego said Muslim leaders have not reported seeing Stockham near their mosques or being contacted by him in any way.

Dearborn, located about 10 miles west of Detroit, is the capital of the Detroit area's Arab-American community, which is one of the largest in the U.S. A third of the city's 100,000 residents trace their roots to the Arab world.