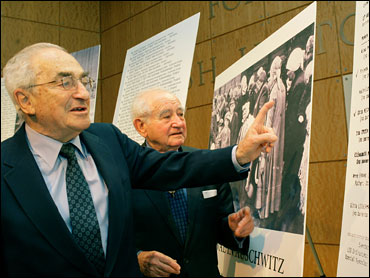 Holocaust survivors are trying to negotiate with the Mormon church over posthumous baptisms of Jews killed in Nazi concentration camps, saying the church has repeatedly violated a 13-year-old agreement barring the practice.

Leaders of The Church of Jesus Christ of Latter-day Saints say they are making changes to their massive genealogical database to make it more difficult for names of Holocaust victims to be entered for posthumous baptism by proxy, a rite that has been a common Mormon practice for more than a century.

But Ernest Michel, honorary chairman of the American Gathering of Holocaust Survivors, said that is not enough. At a news conference in New York City on Monday, he said the church also must "implement a mechanism to undo what you have done."

"Baptism of a Jewish Holocaust victim and then merely removing that name from the database is just not acceptable," said Michel, whose parents died at Auschwitz. He spoke on the 70th anniversary of Kristallnacht, the Nazi-incited riots against Jews.

"We ask you to respect us and our Judaism just as we respect your religion," Michel said in a statement released ahead of the news conference. "We ask you to leave our six million Jews, all victims of the Holocaust, alone, they suffered enough."

Michel said talks with Mormon leaders, held as recently as last week, are over. He said his group will not sue, and that "the only thing left, therefore, is to turn to the court of public opinion."

In 1995, the church agreed not to perform baptisms or other rites for Holocaust victims, except in the very rare instances when they have living descendants who are Mormon.

Church spokesman Mike Otterson said Michel's decision to publicly denounce the church seems like a unilateral termination of the discussion.

"Those steps by Mr. Michel on behalf of the American Gathering were both unnecessary and unfortunate and belie the long and valued mutual respect that we have had in past years," Otterson said in an e-mail.

Posthumous baptism by proxy allows faithful Mormons to have their ancestors baptized into the 178-year-old church, which they believe reunites families in the afterlife.

Using genealogy records, the church also baptizes people who have died from all over the world and from different religions. Mormons stand in as proxies for the person being baptized and immerse themselves in a baptismal pool.

Only the Jews have an agreement with the church limiting who can be baptized, though the agreement covers only Holocaust victims, not all Jewish people. Jews are particularly offended by baptisms of Holocaust victims because they were murdered specifically because of their religion.

"They tell me, that my parents' Jewishness has not been altered but ... 100 years from now, how will they be able to guarantee that my mother and father of blessed memory who lived as Jews and were slaughtered by Hitler for no other reason than they were Jews, will someday not be identified as Mormon victims of the Holocaust?" Michel said Monday.

Otterson said the church has kept its part of the agreement by removing more than 200,000 names from the genealogical index.

But since 2005, ongoing monitoring of the database by an independent Salt Lake City-based researcher shows both resubmissions and new entries of names of Dutch, Greek, Polish and Italian Jews.

The researcher Helen Radkey, who has done contract work for the Holocaust group, said her research suggests that lists of Holocaust victims obtained from camp and government records are being dumped into the database.

She said she has seen and recorded a sampling of several thousand entries that indicate Mormon religious rites, including baptisms, had been conducted for these Holocaust victims, some as recently as July.

"I've seen a steady procession of Jewish Holocaust names, especially names with camps linked to them, going to the International Genealogical Index," said Radkey, who acknowledges that she has limited access to the records. "There's no possible way of knowing exactly how many names, but it's substantial."

Church officials say a new version of the database - called New Family Search - will fix the problems. In the works for six years, the new database will discourage the submission of large lists of unrelated individuals. It will also separate names intended for temple rites from those submitted purely for genealogical purposes, the church states in a letter sent to Michel on Nov. 6.

"The names of any Holocaust victims we can identify in the database are to be flagged with a special designation - not available for temple ordinances," the letter states.

The church also proposes jump-starting a monitoring committee formed in 2005 to review database entries. The committee has met just once since 2005.

In May, the Vatican ordered Catholic dioceses worldwide to withhold member registries from Mormons so that Catholics could not be baptized.