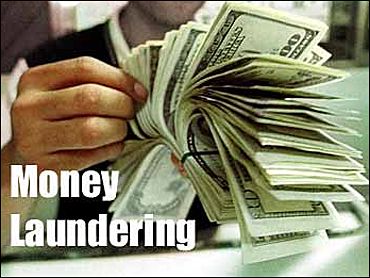 The Treasury Department took action Tuesday against two foreign banks it suspects of money laundering and proposed to cut them off from the U.S. financial system.

The department designated the First Merchant Bank of the Turkish Republic of Northern Cyprus and Infobank of Belarus as "primary money laundering concerns" because they had not acted to combat the problem.

The designation — a tool available under the 2001 USA Patriot Act — alerts the global financial community about the alleged money laundering problems associated with these two banks.

In addition, the department proposed applying a harsh penalty to punish the two banks: cutting them off from the U.S. financial system.

The proposal would close corresponding accounts with U.S. financial institutions. Foreign banks used such accounts to do business in this country.

Treasury said that Infobank "laundered funds for the former Iraqi regime of Saddam Hussein that were derived from schemes to circumvent the United Nations' oil-for-food program, including illegal surcharges and inflated contracts."

First Merchant Bank "has been used as a conduit for the laundering of fraudulently obtained funds," Treasury said. The department also alleged that individuals who own, control and operate the bank "have links with organized crime and apparently have used First Merchant Bank to launder criminal proceeds."

Talking to reporters Tuesday, Levey, who recently assumed the new post at Treasury, also emphasized the need for the financial community to work more closely with law enforcement to help thwart terrorist financiers.
By Jeannine Aversa