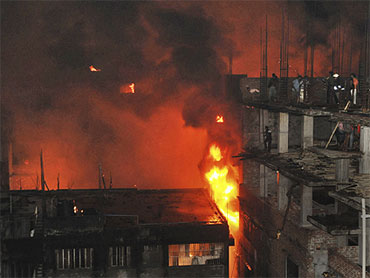 Survivors wept Friday over lost loved ones, including 15 members of a wedding party, as the death toll from the Bangladeshi capital's worst fire in recent history rose to 116. More than 100 others were injured, many with severe burns.

The blaze started Thursday night in the narrow alleys of the old section of Dhaka, crammed with new additions to decades-old buildings, when an electrical transformer exploded soon after a rainstorm swept the city, police officer Abul Kalam said.

As the neighborhood plunged into darkness, the explosion ignited a shop storing flammable chemicals, from where the flames quickly spread to at least six apartment buildings and about 15 stores in the Najirabazar area. Shops selling old newspapers and iron for scrap as well as fruits and vegetables dot the ground floors of residential building, making escape more difficult.

"There were screams, shouts for help and total chaos," Kalam said.

Fire official Abdus Salam said firefighters were delayed because their vehicles couldn't fit through the narrow streets and there were no hydrants or other sources of water.

Firefighters and residents carried victims to hospitals on three-wheeled rickshaws as relatives wailed.

The state-run Dhaka Medical College Hospital was overwhelmed with burn victims. Burn unit chief Shamanta Lal Sen said it was the worst disaster he had seen in his 40-year career. His hospital division struggled to care for the casualties with available beds for only about 25 people.

Government administrator Mohibul Haque said 116 people were confirmed dead, most of them from two or three residential building where families were unable to escape the inferno.

The death toll could rise because some were still feared trapped in the rubble, he said.

Bangladesh will hold a day of national mourning Saturday when flags will be lowered to half-staff and special prayers will be recited at places of worship across the country.

Businessman Mohammad Gulzar was serving beverages to dozens of guests who had just arrived in his small apartment for his daughter's wedding reception when they were jolted by a loud blast. The building was quickly engulfed by fire, and the guests tried to run outside but found themselves trapped as the blaze engulfed the gate of the five-story building.

At least 15 of Gulzar's guests and family members died.

"Why me, Allah? What wrong have I committed?" Gulzar, 50, cried as he sat in front of rows of corpses covered with white shrouds on the road outside his burned apartment.

Gulzar's daughter Runa Aktar survived because she was at a beauty parlor to prepare for the ceremony.

Mohammad Faruk, who lived nearby, lost all 16 family members - his wife, children, grandchildren and parents.

Many of them normally would have been at work, but on Thursday night all came home early because of the heavy rain.

Faruk, however, had to remain at work late because of a business deal and was the only one who survived.

"I should have come home early," he said, sobbing. "Maybe I could have saved some of them."

In 2007, a blaze in a 11-story building in central Dhaka housing two TV stations and a newspaper killed six people, including several who jumped to their deaths from the burning offices. Others were rescued from the rooftop by firefighters using ropes and steel ladders.