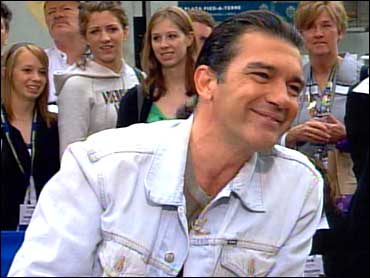 Antonio Banderas says he's flattered to have lent his voice to the character Puss in Boots in the animated "Shrek" films, especially because the role is in a language not his own.

"No, this is one of the things I thought I was never going to be called to do," the 46-year-old Spanish actor said in a recent interview on The Early Show. "Something where I use only my voice. But it kind of makes sense. When you see how the character is supposed to be coming from Spain, supposed to have an accent, a manipulator in a way, too.

"You see a little bit of him, he has a little bit of what donkey has. He's a solitary guy. He's alone. He's searching for a friend. He finds the friend in Shrek. So I love it."

During "Shrek The Third," which opens today nationwide, a spell is cast over Donkey and Banderas' Puss in Books character so that each speaks in the other's voice.

"A traumatic moment in my career, but I survived it," Banderas joked, adding praise for actor Eddie Murphy who played Donkey. "Such a great actor, Eddie Murphy. I respect him very much, " Banderas said. "Wonderful comedian, a guy who is very witty, very sharp."

Born in the Andalusia region of Spain, Banderas spoke no English when he made his United States film debut in 1992 in "The Mambo Kings." He received a star on the Hollywood Walk of Fame in 2005.

Besides talking for his new role, he also gets to sing. Banderas, who acted in a Broadway musical several years ago, and Murphy recorded a version of the 1970s soul classic, "Thank You (Falettinme Be Mice Elf Again)," by Sly & the Family Stone, which closes out the film.

Banderas called the film "a world of adventure," and said it is "going to leave a legacy in animation."

He also confirmed reports that he is in talks with Jeffrey Katzenberg about giving Puss in Boots an animated movie of his own.

Meanwhile, Banderas will be seen on the big screen opposite Meg Ran in "Homeland Security" and is working with Jennifer Lopez in a movie about the disappearance of women in northern Mexico.