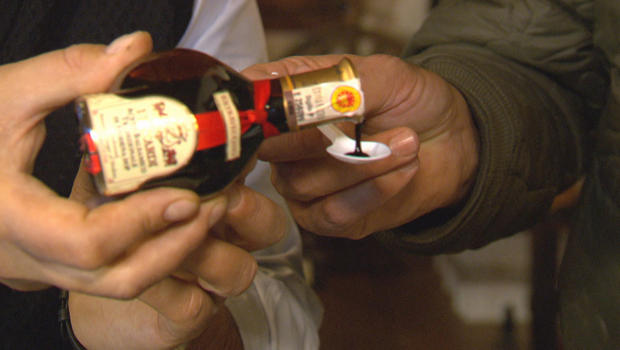 In Italy it's called the vendemmia, or grape harvest. Yet this lambrusco grape varietal won't become a red wine, but, something else, which could take far longer to mature. This is where balsamic vinegar begins.

"I think what is very important is the skin – you see how thick is the skin? It has all the tannins in there. And that gives it color as well as flavor."

Beramendi said, "I don't think there's a more beautiful product in the whole world like balsamic vinegar. It's almost like it has a genie in a bottle."

It's called the "black gold" of Modena, the Northern Italian city that's also home to some other notable Italian products – Ferrari, Lamborghini and Maserati

"Balsamico" can be a luxury product for the table, so valuable that historically it was used as a gift among noble families, or as a wedding dowry. "It was almost like you were exchanging DNA!" Beramendi laughed.

Leonardi, whose family has been at this since the 1870s, explained how they first press the spremuta, or grape juice, which is then heated for 24 to 36 hours and put in giant oak barrels for at least two years, where it ferments.

Then, as it reduces in a process called travaso, it's siphoned into increasingly smaller barrels of different woods, such as mulberry, chestnut, and ash.

"All of these different types of woods each give different flavor notes?" asked Doane.

"Yes, each one of them will impart and leave a beautiful mark of flavor in the balsamic vinegar," Beramendi replied.

Leonardi let Doane sample a balsamic they've been aging for 100 years, which could retail for more a thousand dollars. Beramendi said, "Inside this little barrel, there is the history of four generations inside this Balsamico."

"You need many generations at work because this takes so long to make!" said Doane.

His father, Giovanni Leonardi, said that secrets are passed on through generations, adding, "You can't make balsamic vinegar in a day."

Balsamic is so important to this part of Italy that there's a giant sculpture drop of it sitting in a traffic circle, though clearly it's more common at the table.

Doane said, "People are gonna look at this and say, 'This doesn't seem like the balsamic vinegar that I buy in the store for $5 or $10.'"

Which, Beramendi thinks, may be best appreciated simply on a spoon. "To me, it just coats my entire mouth with a feeling that no other product gives me. It's more than just a food. It's balsamico."