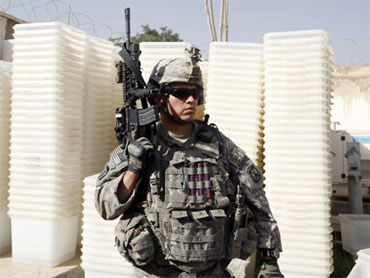 Ann Jones, author of Kabul in Winter, does humanitarian work in postconflict zones with NGOs and the United Nations.

With only days to go before the election in Afghanistan, it looks like the fix is in. That's what most Afghans have been saying all along.

The danger now is not that the election might be tainted by backroom deals or fraud. That's old news. Even international bodies charged with facilitating the process have given up the goal of "free and fair" elections. They aim instead for "credible" elections--which means results that look pretty good, even when they're not.

No, the real danger is that those international bodies, led by the United States, will validate the crooked election as "credible" even when it doesn't look good at all. Yet the hopes of the US-led international community ride on a credible outcome to provide evidence of Afghanistan's conversion to "democracy." Not to mention their vested interests--including an estimated $500 million to stage this extravaganza. If they were going to fess up to fraud, they should have done so long ago.

A quick list of only a few things gone wrong:

Stacking the Deck: All the members of the so-called Independent Election Commission were appointed by President Karzai, and they've never disguised their allegiance to him. So the initial vetting process for candidates eliminated some promising challengers and spared old cronies, including the war criminals the process was meant to screen out.

Backroom Deals: One after another, potential and declared candidates have bowed out to back Karzai. Word leaks out about which ministries they've been promised. Karzai buys the support of local leaders running for provincial offices, using (illegally) all the perks of office, from airplanes to free airtime on national TV, to help his friends and himself. One of his deals brought him Hazara support in exchange for the notorious Shia Personal Status Law, enforcing a wife's sexual servitude in violation of the Afghan Constitution.

Voter Fraud: In May in Ghazni, $200 would buy 200 blank registration cards, but lots of people, including minors, already had plenty. Men were able to get a bunch by handing in a list of women for whom they will vote by proxy. Since no central registry exists, verification is impossible. A recent report places the number of voter registration cards distributed (not including fakes) at 17 million, almost twice the estimated number of eligible voters in the country. To guarantee victory in the last elections in 2004 and 2005, many candidates arranged to have ballot boxes stuffed while awaiting transport to central collection points. So this time the votes are to be tallied at the polling places. That should make it even easier for local big men to fix the results; they won't even have to count.

All this--and much more chicanery--leaves the United States in a no-win situation of its own making. We got into it in 2004 by overestimating our ability to put one over on Afghans and Americans alike. And by underestimating Afghans: we expected voter fraud and we ignored it. Even when the percentage of women voters surpassed an inconceivable 70 percent of the total voter registration (in provinces where women are scarcely allowed out of the house), some internationals welcomed the trend. More blatant fraud this time around, and more conspicuous deals, are proof of Afghans' aptitude for the game we taught them to call "democracy."

This leaves Afghan voters, many of whom still hope for democratic change, in a quandary. Some of them, like some cynical Western election specialists, believe that a crooked election is better than none. But few are happy that almost all the self-appointed candidates for president are the same old suspects: fundamentalist mujahedeen, Islamist mullahs, war criminals, Taliban and drug lords--and not a dime's worth of difference between them. (Their numbers are dwindling from 41 into the 30s as last-minute deals are made.) Even some men say they'll cast a protest vote for one of the two women in the race: the only candidates who had no hand in destroying the country.

The American press, searching for a contest, depicts Dr. Abdullah Abdullah as a contender; and he's the only one for whom I've heard Afghans express real enthusiasm. Interestingly, he promises to devolve power to the parliament and the provincial councils in a kind of decentralized democracy much more attuned to Afghan political traditions--but not at all what the United States has had in mind. "A presidential government always turns into an autocracy," he says.

Which may account for recent reports from a backroom that former Ambassador Richard Holbrooke, the Obama's administrations special envoy to Afghanistan and Pakistan, is brokering another deal: Ashraf Ghani, the third-ranked candidate, is to shift his support to Karzai and become a kind of prime minister in his government. As a former World Bank official and finance minister, Ghani is reputed to be an honest man; he's a known quantity who could actually run the place.

Whether this deal goes through or not, the rumors confirm Afghan assumptions that Afghan votes have no influence in the outcome of the election. Dr. Abdullah's supporters cry foul, promising that if he doesn't win, they'll take to the streets--with Kalashnikovs. And of course the hot war against the Taliban continues.

Which brings us to another great danger: the United States has seized upon the election as the occasion and the excuse for unprecedented expansion of Afghan military and paramilitary forces, not to mention the influx of more and more American troops. We're not democratizing Afghanistan. We're militarizing it.

The Afghan National Police (ANP), who claim a strength of 82,000 men, are training 15, 000 additional "soldiers" to provide "security" for the elections. The Ministry of the Interior and DynCorp, the American for-profit contractor on the job, condensed basic training from eight weeks to three--just enough to drill some principles of tactics and firearms so police can protect polling places without necessarily getting slaughtered by the Taliban. For the most dangerous job in the country, they get $5.00 a day. If they survive the election, they'll return for full basic training.

The Afghan National Army (ANA) is in training (at a base built by Soviets and later used by Taliban) with mentors from the United States, Britain, France and the American for-profit contractor MPRI. Basic training for soldiers takes ten weeks, and each course turns out five battalions, or 6,000 men. Thirty percent of them will go on to two months of Advanced Combat Training. There's also a six-week training course for former mujahedeen who know how to fight--they beat the Soviet Union--but not as a unit, as American trainers think they should.

In July, the commander of the Kabul Military Training Center (KMTC) told me that more than 90,000 soldiers were ready for service, up from 68,000 a year earlier. (Though when US Marines entered Helmand Province on July 2, only about 600 ANA soldiers went with them.) Intensified training puts the ANA "approved end strength" of 134,000 soldiers within reach by December 2011, according to KMTC officials, but already the ANA is thinking ahead to 200,000 men or more. Here as in the ANP and the American military, the approved end strength is just a number on the way to something bigger.

And if that's not enough, the United States and the International Security Assistance Force (ISAF) set up an Afghan Public Protection Program, arming groups of young men in Wardak Province to bring "security" to their villages. Wardak parliamentarian Dr. Roshanak Wardak blasts the idea: "You want Pashtun boys to shoot their cousins? This is a strategy?" Based on the "Sons of Iraq" scheme in Iraq, the pilot project is meant to expand to other provinces.

Another scheme transplanted from Iraq calls for hiring thousands of armed tribal militiamen in eighteen southern provinces to provide "security" for the elections. They're promised permanent jobs in their home areas if they prove "effective." It's based on "the Awakening" in Iraq, a plan that paid Sunnis in Anbar Province to fight against Al Qaeda; and a whole new branch of government has been set up to run it. But this transplant too looks like a blunder. It's one thing to pit Iraqi Sunnis against foreign Al Qaeda fighters, and quite another to recruit Pashtuns to shoot their cousins for $150 a month.

All this training and recruiting reminded me of George W. Bush's promise about Iraq: "When they stand up, we'll stand down." So I went out to Bagram Air Base (originally built by the Soviets) to see if anybody is standing down yet. Instead, that other prominent for-profit contractor KBR is busy putting up bigger dormitories, more commodious showers, more permanent quarters. And immense vacant fields that appear to be at least as large as the existing base are being de-mined and cleared of debris in preparation for more construction. (Is this what's meant by "development" in Afghanistan?) As for the Detention Center to which many former residents of Guantánamo were transferred, that's been expanded too, but it's off limits to all but the Red Cross. "Never mind," a soldier told me. "The real action is at the FOBs"--Forward Operating Bases. "That's where the shit goes down. Out there."

To ignore history is never a good idea. Remember when US policy embraced Islamic fundamentalists as our natural allies (as a Christian nation) against godless communism? And where are they now? Out there--among the FOBs and the soldiers of the ANP and the ANA and the pseudo Sons of Iraq and the brand-new same-old militias and the Taliban. If the contest at the ballot box doesn't move the country to greater violence, all this "security" should do the trick.

It's too bad about Afghans though. Given half a chance, they'd vote for change and peace and reconciliation and no more soldiers.

By Ann Jones:
Reprinted with permission from The Nation

Nearly half of Americans feel they pay too much in taxes
Thanks for reading CBS NEWS.
Create your free account or log in
for more features.
View CBS News In
CBS News App Open
Chrome Safari Continue
Be the first to know
Get browser notifications for breaking news, live events, and exclusive reporting.