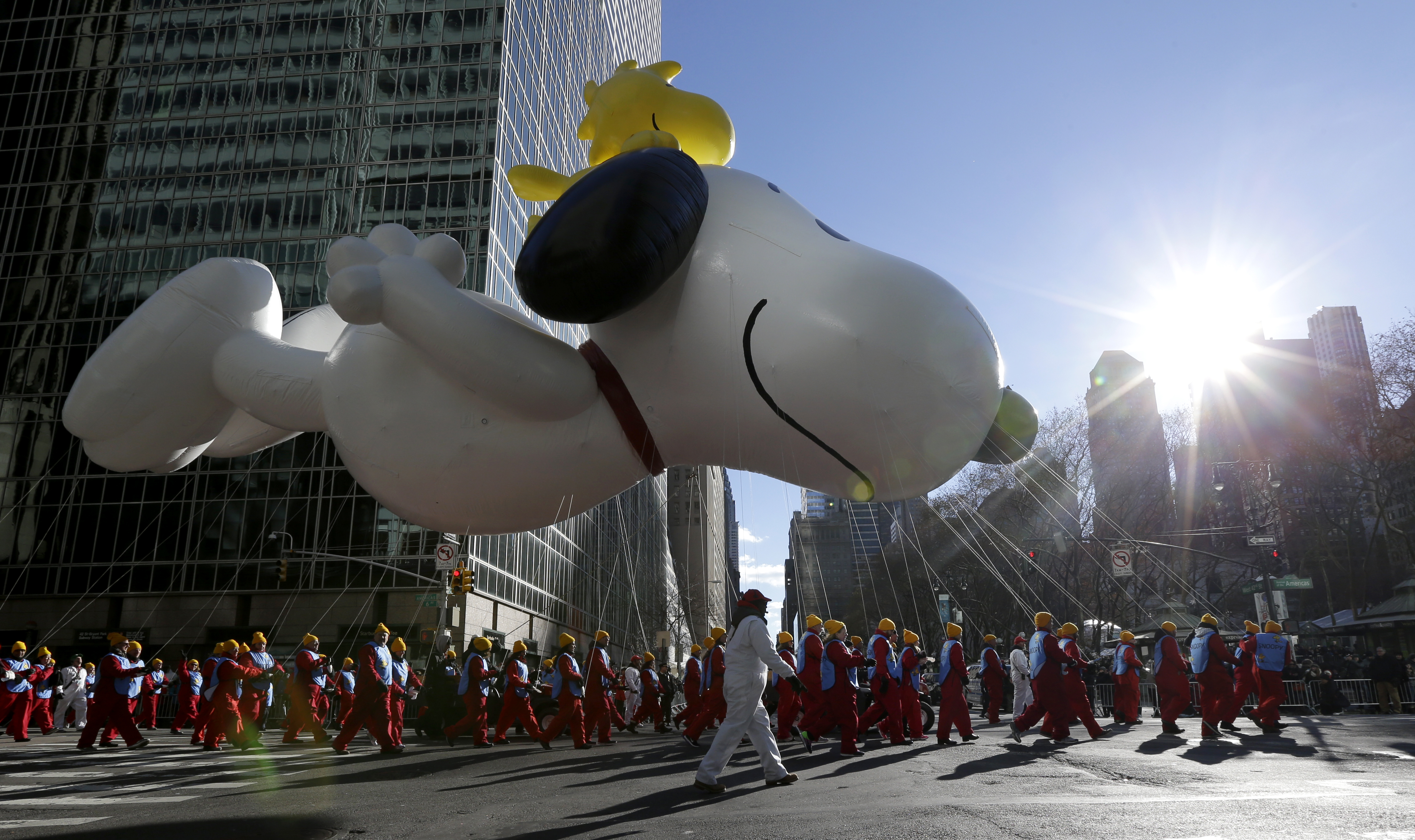 NEW YORK -- The big balloons soared along with the crowd's spirits Thursday as the annual Macy's Thanksgiving Day Parade made its way through the streets of New York City.

There'd been some concerns about whether the wind could keep 16 giant balloons grounded, but the cherished tradition prevailed.

High winds have made navigating balloons down Broadway risky business. They become unstable and are prohibited in winds above 23 mph or gusts of 34 mph.

Macy's began taking extra precautions to secure balloons after a 1997 incident involving The Cat in the Hat.

Forty-three mph winds blew the inflated feline into a lamppost. Parts of it seriously injured a woman below.

Today, each balloon is walked by about 100 handlers, accompanied by one NYPD sergeant. Police Commissioner Ray Kelly said officers were prepared.

"We've done a lot of training on this. We have experience doing it. We have a sergeant assigned to each balloon," said Kelly.


"We thought they'd find a way to pull it off," said parade-goer John Mispagel, of San Jose, Calif. "It's really fun seeing so many people having such a great time."

Balloon handlers were keeping a tight grip on their inflated characters and held them fairly close to the ground in tree-lined areas. The wind was around 26 mph.

Mispagel and his wife, Susan, said Sonic the Hedgehog got caught on a tree while rounding a corner near the start of the parade route; handlers used cutters on a rope to free the balloon.

The cheering throngs were bundled against a 30-degree chill, but the sun was shining. Some in the crowd lifted small children onto their shoulders.

An excited 9-year-old Lily Thomolaris, of Pittsburgh, was delighted to "see all the balloons." But she especially thought a big turkey was really cool.

Matthew Ragbe, 11, lives in the neighborhood and came out to enjoy the sights. His twin brother decided not to leave their warm apartment.

"Lazy is more like the operative word," joked their mother, Alison Ragbe.

In Philadelphia, gusty winds of 28 mph limited use of balloons during the city's Thanksgiving Day Parade, with officials citing concern for the safety of participants and spectators.

Instead of flying along the entire route, the balloons soared only around Eakins Oval and the broadcast area near the Philadelphia Museum of Art.

Elsewhere in the country, Thanksgiving traditions were largely unaffected by the weather.

Jim Leyland, former manager of the Detroit Tigers, served as grand marshal of that city's Thanksgiving Day parade, which is billed as the nation's second largest, behind New York's. Revelers braved snow showers and slick roads to attend the festivities, which included about two dozen floats and a performance by singer Ruben Studdard.

In Washington, President Obama and his family paused to celebrate a quiet holiday at the White House. Their menu was quintessential Thanksgiving, including turkey, honey-baked ham, cornbread stuffing, greens and six choices of pie.

In New York City, volunteers from Citymeals-on-Wheels helped escort dozens of elderly residents from neighborhoods affected by Superstorm Sandy to a restaurant feast in Manhattan.

The organization funded almost 20,500 Thanksgiving meals, including 13,000 delivered in advance to homebound elderly.