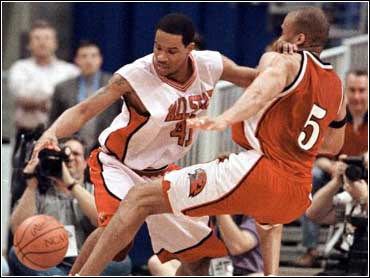 Duane Clemens squeezed his grandmother tightly as tears flowed down his cheeks. He and his Ball State teammates had just made it to the NCAA tournament, and he knew his late grandfather would be proud.

"This was for him," Clemens said. "I played all year with his obituary in my sock. I wanted to get this done for him."

Lonnie Jones blocked a tournament-record seven shots and Ball State earned an automatic trip to the NCAAs on Wednesday night with a 61-58 victory over Miami of Ohio in the championship of the Mid-American Conference tournament.

The Cardinals (22-8), the tourney's No. 2 seed, played tough defense and made their free throws down the stretch to hold off the surprising RedHawks (15-15), the No. 9 seed.

Clemens, the tourney's MVP, scored 14 points and Theron Smith had 12 points and eight rebounds for the Cardinals, who will be making their seventh NCAA tournament appearance and first since 1995.

"This was my last chance to get there," said Clemens, a senior. "That's what makes this even better. This is an incredible feeling."

The key for Ball State was the 6-foot-11 Jones, who dominated inside in the second half, blocking six shots and altering several more. Any time a Miami player penetrated the lane, there was Jones.

"I'd like to do something to Lonnie Jones, and shrink him or something," said Miami coach Charlie Coles, who will have to contend with Jones for two more years.

Jason Stewart scored 25 points and Rob Mestas had 11 for Miami, which scored only two field goals in the final 4:27 and shot just 31 percent from the floor.

Part of that was because they were afraid to go inside on Jones.

"He definitely is a great inside presence," Mests said. "He made us cautious on our drives. He's going to pose a lot of problems for teams in the NCAA tournament."

The Cardinals' win may pose some problems for the NCAA tournament selection committee. The MAC has never had three teams make the 64-team field, but the league thinks both Kent and Bowling Green deserve at-large berths.

"They should both be in, too," Ball State guard Mickey Hosier said.

Ball State's season began to take a nosedive shortly after a 20-point victory over Purdue, and the Cardinals began the MAC regular season 3-6. But they won 11 of their last 12 and the school's seventh MAC tourney title.

"We're going dancing, baby!" Ball State coach Ray McCallum yelled as his players pounded on each other near midcourt. "This is what it's all about."

Clemens, who scored a career-high 35 in a semifinal victory over Ohio University, cried and hugged his grandmother, Virginia Cox, after earning his first trip to the NCAAs.

Defense ruled in the second half as neither team could get an open look at the basket. Both teams went 5:16 without scoring a field goal. Before Mestas made a layup with 22 seconds left, Stewart was the only player to score for Miami.

Stewart misfired on Miami's next possession and Smith hit a tough leaner to put the Cardinals up 55-54.

Stewart made two free throws with 2:09 left but Smith scored the game's biggest basket, getting fouled on a layup to make it 57-54.

"That broke our back," Coles said.

Smith missed his free threw, but Jones blocked a shot by Anthony Taylor and Stewart forced a 3-pointer that was short.

Mestas' layup closed it to three, but Smith made two more free throws with 20.9 seconds left.

Despite the loss, Coles was proud of his team's postseason push. He wasn't expecting it from a team that lost Wally Sczcerbiak to the NBA after making it to the Sweet 16 last year.

"We were three points from the NCAA tournament," he said. "Not bad for a team ranked 222nd."