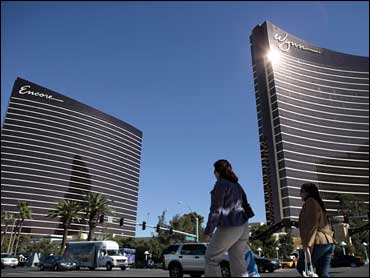 Wells Fargo & Co. is canceling a pricey Las Vegas casino junket for employees after a torrent of criticism that it was misusing $25 billion in taxpayer bailout money.

The company initially defended the trip after The Associated Press reported it had booked 12 nights at two of the city's most expensive hotels. But within hours, investigators and lawmakers on Capitol Hill had scorned the bank, and the company canceled.

The conference is a Wells Fargo tradition. Previous years have included all-expense-paid helicopter rides, wine tasting, horseback riding in Puerto Rico and a private Jimmy Buffett concert in the Bahamas for more than 1,000 employees and guests.

"I was amazed with just how lavish it was," said Debra Rickard, a former Wells Fargo mortgage employee from Colorado who attended the events regularly until she left the company in 2004. "We stayed in top hotels, the entertainment was just unbelievable, and there were awards - you got plaques or trophies."

Because of the bailout and the recession, other banks have canceled employee outings, including Morgan Stanley, which informed employees Monday that an appreciation trip to Monte Carlo was off. Wells Fargo, however, has not.

"Recognition events are still part of our culture," spokeswoman Melissa Murray said Tuesday afternoon. "It's really important that our team members are still valued and recognized."

How state and local taxes could drive Congress' infrastructure talks

Corporate retreats have attracted criticism since the bank bailout last fall. Congress scolded insurance giant American International Group Inc. for spending $440,000 on spa treatments for executives just days after the company took $85 billion from taxpayers. AIG has since canceled all such outings.

The weekend of Feb. 25, Wells Fargo's insurance division was scheduled to host a 40-person team for a two-day meeting at the Mandalay Bay Hotel, according to the Las Vegas Convention and Visitors Authority.

Kevin Waetke, another spokesman for Wells Fargo, defended the trip, before it was cancelled. He said the company, which recently acquired Wachovia Corp., had a long-standing tradition of recognizing top employees.

"This year, we have the unique opportunity to bring together our Wells Fargo and new Wachovia mortgage consultants to focus on continuing to do all we can for U.S. homeowners," Waetke said.

In Washington, members of Congress disagreed.

"Let's get this straight: These guys are going to Vegas to roll the dice on the taxpayer dime?" said U.S. Rep. Shelley Moore Capito, a Republican who sits on the House Financial Services Committee. "They're tone deaf. It's outrageous."

In previous years, top Wells Fargo loan officers were treated to performances by Cher, Jay Leno and Huey Lewis. One year, the company provided fortune tellers and offered camel rides, Rickard said. Every night when employees returned to their rooms, there was a new gift on their pillows, she said.

Rooms at the Wynn and the Encore are consistently among the most expensive in Las Vegas. The $2.3 billion Encore opened in December. Its decor includes a 27-foot Asian dragon made from 90,000 Swarovski crystals and artwork by Colombian artist Fernando Botero. One of the restaurants features Frank Sinatra's 1953 Oscar.

Both properties have high-end retail stores, including Manolo Blahnik at Wynn and Chanel at Encore.

Morgan Stanley, another $25 billion bailout recipient, had been planning to send its top employees to a hotel in Monte Carlo this April. A Morgan Stanley travel agent said that the trip, along with a similar event in the Bahamas, was still on as of Tuesday afternoon. But company spokesman Jim Wiggins said employees were told Monday that the events were canceled. He said the travel agent was incorrect.

"Given the current economic and business environment - and to further align our interests with those of our shareholders - we are making some difficult decisions to reduce or eliminate programs that do not directly impact our ability to serve our clients, customers and communities," Bank of America spokeswoman Kelly Sapp said in an e-mail.