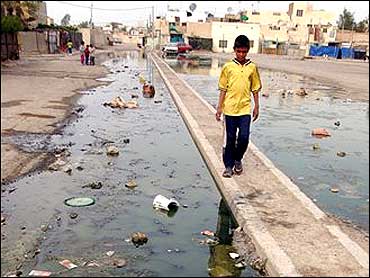 The statement from Mayor Alaa Mahmoud al-Timimi was an indication of the daily misery that Baghdad's 6.45 million people still endure more than two years after the U.S.-led invasion. They are wracked not only by unrelenting bombings and kidnappings, but by serious shortages in water, electricity and fuel.

"It's useless for any official to stay in office without the means to accomplish his job," al-Timimi told reporters.

Al-Timimi is seeking $1.5 billion for Baghdad in 2005 but so far has received only $85 million, said his spokesman, Ameer Ali Hasson.

Efforts to expand Baghdad's water projects were set back earlier this month when insurgents sabotaged a pipeline near Baghdad. Now, some complain the water they do get smells bad, and Hasson acknowledged in some areas, the water gets mixed with sewage.

"The problem is escalating," said al-Timimi, a Shiite who took office in May 2004.

The pipeline has been repaired and water levels are expected to return to normal in the coming days, the mayor told reporters. But that won't help with shortages that existed before the sabotage, he said.

"I am part of the government and aware of the problems the country is facing," al-Timimi said. "But I need to have technical support from the concerned parties at the government. The people are blaming me and the Baghdad municipality."

According to City Hall, Baghdad produces about 544 million gallons of water per day, some 370 million gallons short of its required amount. Some 55 percent of the water is lost through leakage in the pipes.

Iraqis also complain of shortages of power and fuel.

Electrical shortfalls were common during the Saddam Hussein era and attributed to a poor distribution network, but the situation has worsened due to sabotage and lack of maintenance.

Before the U.S.-led invasion, Baghdad residents had about 20 hours of electricity a day. Today, they get about 10, usually broken into two-hour chunks.

In addition, Iraq is not able to refine enough oil, so must import gasoline. Convoys carrying fuel are often attacked by insurgents and the ensuing shortage has led to a black market in Baghdad.

"We had a measurable success," said U.S. Air Force Brig. Gen. Don Alston, a spokesman for coalition forces in Iraq. He did not offer specifics.

More than 1,000 members of the Iraqi security services had died since the transfer of sovereignty one year ago, the U.S. military said without giving an exact figure.

At least 1,743 members of the U.S. military have died since the beginning of the Iraq war in March 2003, according to an Associated Press count. At least 1,341 died as a result of hostile action. Of those, 75 were killed in June, one of the deadlier months.