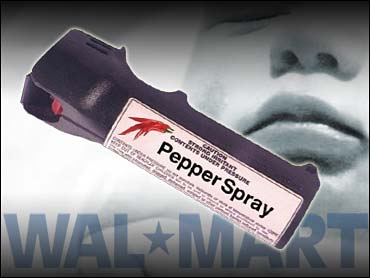 A woman doused a 2-month-old girl with pepper spray while feuding with the infant's family in a Wal-Mart, police said.

Lorlie M. Gantenbein, 36, of Sagle, was charged Tuesday with felony injury to a child. She was released on $5,000 bail and ordered to have no contact with the baby's family.

The 2-month-old girl was recovering at home after being sprayed Monday, police Chief Mike Hutter said. The infant was treated at a hospital.

Gantenbein in a telephone interview on Wednesday denied using the pepper spray. She said her 16-year-old daughter used the spray, but did so in self-defense.

The victims told The Bonner County Daily Bee the second discharge was intentionally directed at the child, an allegation Gantenbein disputes.

Gantenbein said she bought the spray for her daughter as tensions rose between the two families after the Gantenbeins rented property to the baby's family and then evicted them. The feud escalated when her daughter began dating the baby's father, she added.

Monday's confrontation began at a gas station, but continued when the two families crossed paths inside the discount store.

"We kind of think they went out there intentionally, but either way, they find them in Wal-Mart," said police Chief Mike Hutter.

According to police, Gantenbein's daughter sprayed the infant's grandmother and aunt, one of whom was holding the child. Gantenbein then took the canister and sprayed the baby, authorities said. The juvenile was cited with two counts of battery.

In the phone interview, Gantenbein said the baby's aunt grabbed her daughter by the arm, prompting the daughter to use the pepper spray. When the grandmother reached toward Gantenbein's daughter, the girl sprayed her too, Gantenbein said.

"The grandmother ran through the fog with the baby," she said. "It didn't get hit in the face."

However, the baby's mother, Christina Clayburn, told a Spokane, Wash., television station that Gantenbein "was yelling, 'Get the baby! Get the baby!' ... Then she took the Mace out of her daughter's hand and sprayed it directly into my daughter's face."

"We're taking statements from both sides and evaluating it from there," he said.

The store had to be evacuated for two hours.