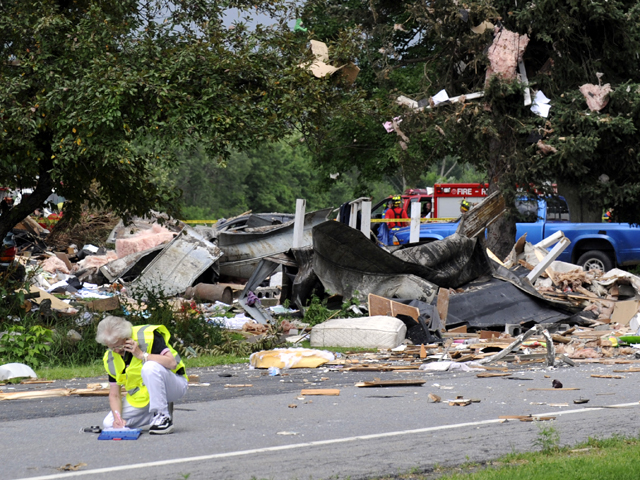 State police said they still don't know what caused the house to explode Wednesday afternoon in Salem, 40 miles northeast of Albany, the capital. Neighbors and police said a propane gas leak may have sparked the blast, which happened shortly after noon and could be heard for miles around the community of rolling farmland.

"It sounded like a hundred sticks of dynamite going off," said Salem resident Josh Nelson, who was several miles away.

Three people died at the scene: Tammy Palmer, 41, and Robert Sanford, 16, both of whom lived at the house, and Clarissa Lyn Porlier, 19, who was visiting.

Six other people remained hospitalized in Albany, Westchester and Vermont.

Salem, a rural town known for its scenic covered bridges, museums, handsome period homes and historic landmarks from Revolutionary War days, is on the Vermont border southeast of Lake George. The destroyed house was on a road of widely spaced homes separated by farmland.

Neighbor Joseph Brandmeyer ran to the home after hearing the explosion to find pieces of furniture, board and other debris scattered around the yard and road and in trees. He said he was helping a woman out of the rubble when he spotted her limp baby under a board.