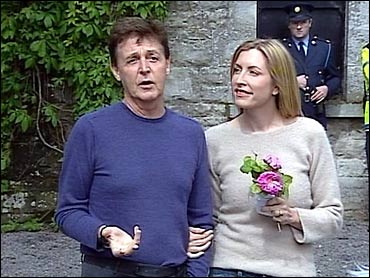 The McCartney clan is bigger by one, and Sir Paul and Heather Mills McCartney say they are "ecstatic."

The McCartneys say despite the early arrival, Beatrice weighs a healthy 7 pounds and both baby and mother are doing fine.

"She is a little beauty. We couldn't be prouder," said Mills, 35, and McCartney, 61, in a statement posted on the former Beatle's Web site. "Our immediate family were told the news right away and are all as overjoyed as we are at the early arrival of our little bundle of joy."

Too soon to say who baby Beatrice resembles - her Mum and Dad are starting off her young life with a bit of privacy - no photos so far.

The baby is Mills' first child and a double joy for the new mom, who has had some health problems and earlier this year expressed the fear that she would never have a child of her own.

"The chances of me getting pregnant are about that much," said Mills at that time, in a television interview, holding up her thumb and finger an inch apart.

Mills had troubles early in life - at one point even sleeping in the street - but pushed ahead, became a success as a model, hit hard times again with the loss of a leg in a motorcycle accident, but used the lessons she learned from that as she worked to get prosthetic limbs to others who needed them.

The couple married in June 2002, several years after meeting in connection with her charity work for victims of landmines.

McCartney has three adult children Stella, Mary and James, and a stepdaughter, Heather, from his marriage to first wife Linda McCartney, who died in 1998 from breast cancer.

As of late Thursday, parents and baby were all still at the Hospital of St. John and St. Elizabeth.

The baby is named after Mills' late mother Beatrice and McCartney's aunt Milly.

The birth of the newest McCartney has been eagerly anticipated by the tabloid press, and one paper Thursday wound up with both a scoop and egg on its face.

The Daily Mirror newspaper was the first to report that the baby had been born, scooping everyone.

But the scoop wasn't the kind Fleet Street dreams about.

The Mirror said the baby was a boy.

Definitely not, says the hospital.