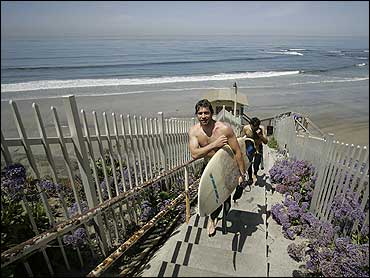 A shark expert says an autopsy has confirmed a great white killed a triathlete in the waters off San Diego County last week.

Los Angeles-area shark expert Ralph Collier assisted with the autopsy. He said Monday the fragments indicate the shark was a great white 15 to 16 feet long.

Martin, was bitten Friday morning while training for a triathlon. The 66-year-old quickly died from blood loss.

Martin, a retired veterinarian, was the first shark fatality in San Diego County since 1994. Prior to that, the last known fatal attack in the area was in 1959.

The beach reopened Saturday and authorities kept watch Saturday over a stretch of Southern California beaches, scanning the waters for a shark they believe killed a triathlete a day earlier.

Experts said the likelihood of finding the shark that attacked Martin was slim.

Sharks are rare in the water off Southern California, though female great white sharks sometimes come south from their usual territory in the cooler waters of the central and northern coast to pup. Few make the mistake of attacking humans instead of seals or sea lions, their usual prey.

"It's just very bad luck for that one man," said Richard Rosenblatt, a professor emeritus of marine biology at the Scripps Institution of Oceanography in San Diego.

Rosenblatt said he believed the bite pattern on Martin's legs indicated the shark was almost certainly a great white that may have been 12 feet to 17 feet long. The sharks, the largest ocean predators, can weigh up to 5,000 pounds, according to National Geographic.

The attack was unusual because it took place over a sandy bottom, Rosenblatt said. Sharks typically attack over rocks, which provide better camouflage.

The state's last fatal shark attack took place on Aug. 15, 2004, off the coast of northern California's Mendocino County, according to data from the state Department of Fish and Game. The victim was a man diving for shellfish with a friend. On Aug. 19, 2003, a woman swimmer was killed by a great white at Avila Beach in San Luis Obispo County on the central California coast.

Overall, shark attacks are extremely rare. There were 71 reported worldwide last year, up from 63 in 2006. Only one attack, in the South Pacific, was fatal, according to the University of Florida.

The university's International Shark Attack File has counted an average of 4.1 people killed by sharks annually worldwide in the past seven years.