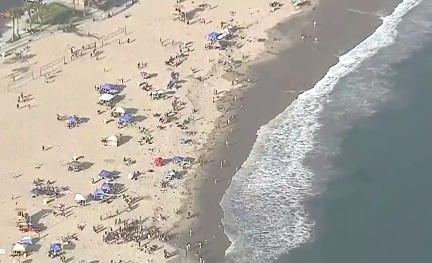 LOS ANGELES -- Authorities say a swimmer was bitten by a shark just off the coast of Corona Del Mar in California on Sunday, CBS Los Angeles reported.

A rescue boat reached the woman in the water and transported her to safety.

She was conscious and awake. She suffered large bite marks to her torso and shoulder.

The beach from Newport Pier to Corona Del Mar Beach has been temporarily closed.

The City of Newport said on Facebook that a police helicopter that assisted in the evacuation effort is also searching the water to try and determine what type of animal bit the victim.

The woman has multiple, serious injuries, but is expected to survive.

Also on Sunday, a 13-year-old boy was bitten by a shark in Florida. To find out more, click here.