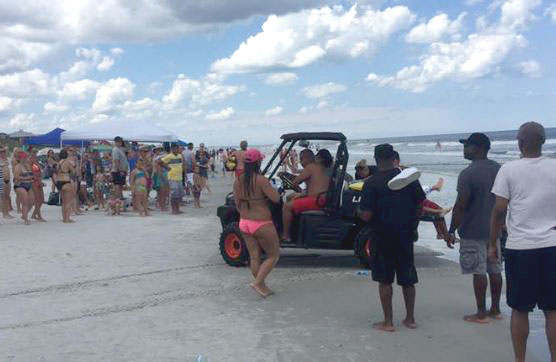 NEPTUNE BEACH, Fla. -- A 13-year-old boy was bitten by a shark at Neptune Beach in Florida on Sunday, CBS affiliate WJAX reported.

Neptune Beach police said the boy and his stepfather were in 2-feet of water when a shark bit the boy on the leg, WJAX reported.

Spokesperson Michael Key told CBS News that at about 2:55 p.m. Neptune Beach lifeguards were notified of a teenage boy being pulled by other swimmers from an apparent shark bite.

Lifeguards estimate injuries come from a 5 to 6-foot-long shark.

One witness tells WJAX he saw a woman carry the boy from the water.

"This lady runs in the water carries this boy," said Lou DeMark. "All you see is just blood, dripping and dripping out for about 50 feet."

The boy was bitten on the backside of his right knee and his calf.

The largest laceration was about eight inches long.

His injuries are serious, but according to Key, they are not life threatening.

The teen was taken to UF Health Jacksonville in Florida. He is in stable condition.

Last Saturday, an 11-year-old girl was badly bitten by a shark at Huguenot Park, which is approximately eight miles north of where the boy was bitten, WJAX reported.

Also on Sunday, a woman was likely bitten by a shark off the coast in California. Click here to find out more.