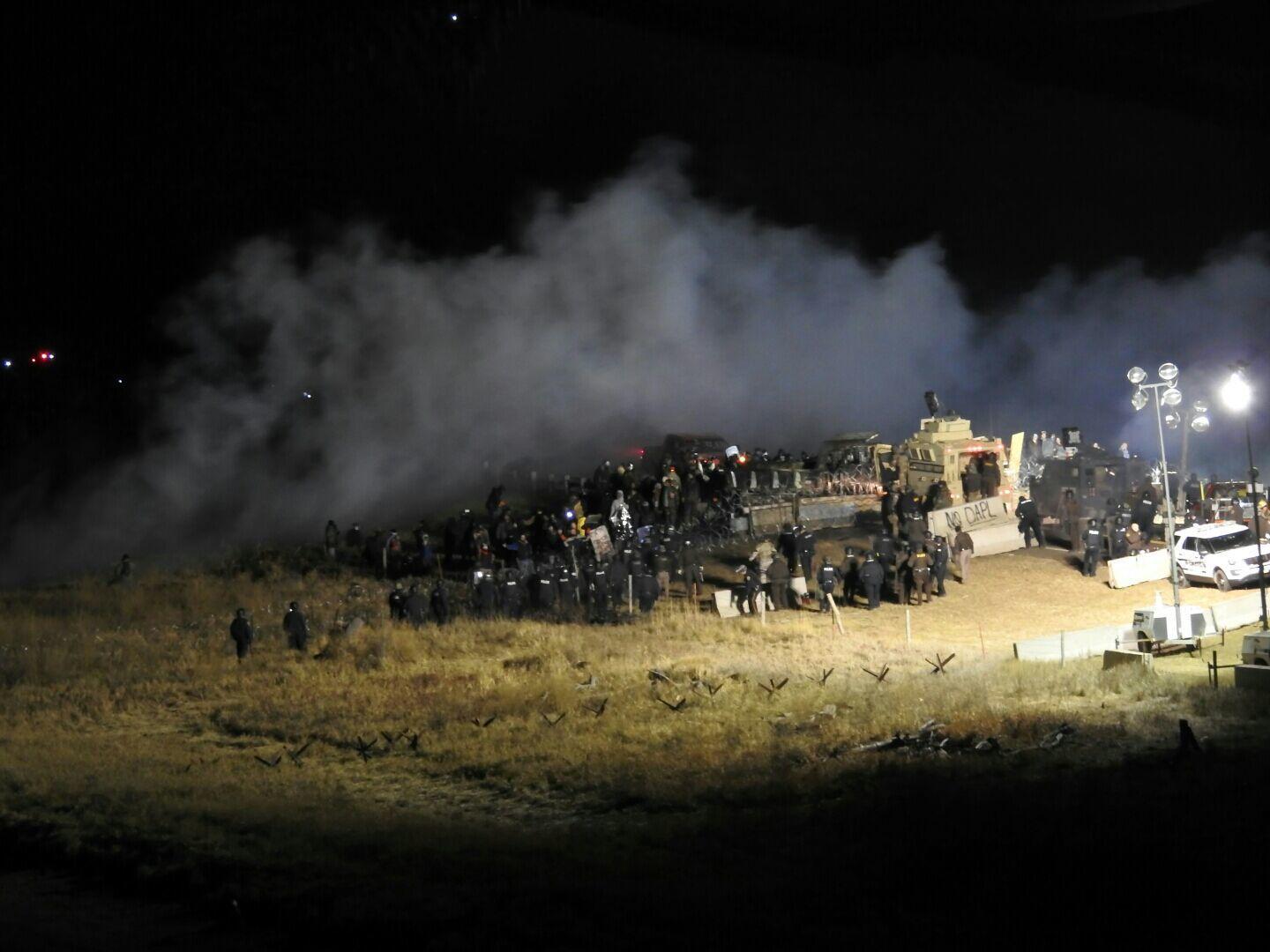 CANNON BALL, N.D. -- Authorities on Monday defended their decision to douse protesters with water during a skirmish insubfreezing weather near the Dakota Access oil pipeline, and organizers said at least 17 protesters were taken to the hospital - including some who were treated for hypothermia.

The clash occurred late Sunday and early Monday as protesters trying to push past a long-blocked bridge on a state highway were turned back by authorities using tear gas, rubber bullets and water hoses. One officer was injured when struck in the head with a rock. One protester was arrested.

Protesters and officers massed at the bridge again late Monday morning, but protesters dispersed a few hours later at the request of tribal elders after police warned the crowd that they’d identified firearms and that anyone with a weapon should leave.

The Standing Rock Sioux and others oppose the 1,200-mile, four-state pipeline being built to carry oil from western North Dakota to a shipping point in Illinois because they say it threatens drinking water on their nearby reservation and cultural sites. Pipeline developer Energy Transfer Partners has said no sites have been disturbed and that the $3.8 billion pipeline will be safe.

The pipeline is largely complete except for the section under a Missouri River reservoir in southern North Dakota, and ETP Chief Executive Kelcy Warren said Friday the company is unwilling to reroute the project.

What’s known as the Backwater Bridge on state Highway 1806 has been shut down for weeks because authorities say it might be unsafe due to earlier fires set by protesters. Protesters say the closed bridge near their main camp blocks emergency services, and they accuse authorities of keeping it shut down to block their access to pipeline construction sites.

Authorities dispute that. Additional testing is needed to make sure the bridge is safe, and that can’t be done until the area is deemed safe for inspectors, said state Transportation Department spokeswoman Jamie Olson.

At least 17 protesters were injured severely enough to be taken to hospitals during the overnight skirmish at the bridge, said Dallas Goldtooth, an organizer with the Indigenous Environmental Network.

“Hypothermia, a number of head injuries from being shot with rubber bullets, one individual had a heart attack,” he said.

Daniel Kanahele, 64, a native Hawaiian, said he was hit with tear gas, water spray and a rubber bullet in a leg, and “it took me off my feet.” He was treated at the scene.

Although Goldtooth said a water cannon was used to douse the protesters, Morton County Sheriff Kyle Kirchmeier said only fire hoses were used. Sheriff’s spokesman Rob Keller said a tactical vehicle spraying tear gas has been mistaken by some people as a water cannon.

Kirchmeier defended the use of water hoses, saying protesters were using aggressive tactics themselves.

“We’re just not going to let people or protesters in large groups come in and threaten officers. That’s not happening,” the sheriff said.

U.S. Sen. Al Franken, a Minnesota Democrat, sent a letter Monday to Attorney General Loretta Lynch, calling the use of water “excessive and unnecessary” and urging the Justice Department to “prevent further escalation of violence.”

Protesters also were active Monday in Bismarck, about 50 miles to the north. A group briefly blocked streets in the downtown area, and protesters later locked arms outside the police station and refused to leave. There was one arrest in the first incident and 16 arrests in the second.

Doors at the state Capitol, where protesters have previously demonstrated, were locked due to the protest activity in the city. Access to the building was granted only to workers with security key cards and members of the public with legitimate business, according to Highway Patrol Lt. Tom Iverson. The patrol provides security at the Capitol.