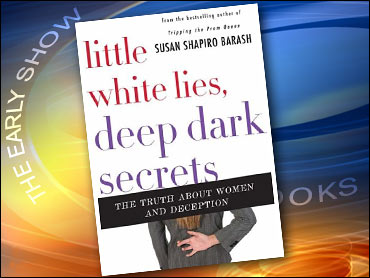 Women lie more frequently than men, and they're much more clever about it and talented at it, to boot, a new book concludes.

In "Little White Lies, Deep Dark Secrets: The Truth About Women and Deception," Susan Shapiro Barash cites an online survey of 500 women in asserting that females fib about everything from love, to money, to plastic surgery.

On The Early Show Tuesday, CBS News correspondent Bianca Solorzano explored the topic, and co-anchor Maggie Rodriguez chatted about it with actress and comedian Nancy Giles, who's a contributor on CBS News Sunday Morning and Dr. Jennifer Hartstein, a clinical psychologist in New York City.

Solorzano says the book "takes an honest look at why women lie," seeking "some truth about dishonesty." Some 75 percent of the women who responded to the survey said they lie at work to keep their job. Half admitted lying about how much they like being a mother. And 75 percent fessed up to half-truths about shopping (telling their husbands they spent less than they really did).

Hartstein says, "It's really a social thing. We don't want to hurt anybody's feelings. We don't want to put anybody down. So, we really work very hard to keep the peace, keep it easy, be nice, be cordial. But you can just say, 'Oh, it's great,' and walk away, or you don't have to say anything at all, because silence is golden sometimes!"

Giles kidded that, "In many ways, we sort of have to (lie). It's part of our DNA -- just to manage, to keep our lives in balance. If you told the truth all the time, you'd be exhausted!"