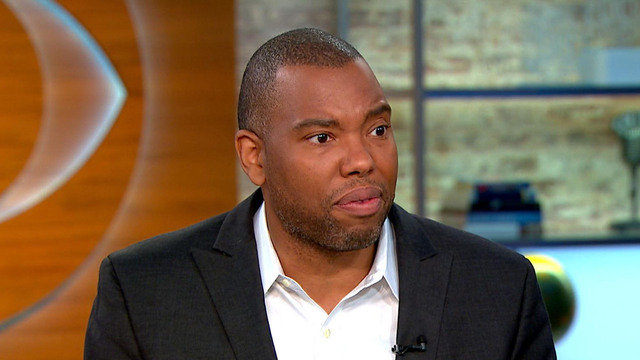 Author Ta-Nehisi Coates says he's terrified by the number of unarmed black men who have died at the hands of police. In the book, "Between the World and Me," Coates writes a letter to his 14-year-old son and explores what it means to be black in America.

"But you are human and you will make mistakes. You will misjudge. You will yell. You will drink too much. You will hang out with people whom you shouldn't. Not all of us can always be Jackie Robinson--not even Jackie Robinson was always Jackie Robinson. But the price of error is higher for you than it is for your countrymen, and so that America might justify itself, the story of a black body's destruction must always begin with his or her error, real or imagined--with Eric Garner's anger, with Trayvon Martin's mythical words ("You are gonna die tonight"), with Sean Bell's mistake of running with the wrong crowd, with me standing too close to the small-eyed boy pulling out."
--Ta-Nehisi Coates in "Between the World and Me"

In the book, Coates recounted the night his son stayed up late to hear what would happen to Ferguson officer Darren Wilson who shot Michael Brown, an unarmed black teen. The St. Louis County decided not to indict Wilson, sparking demonstrations across the country.

"He's young and has certain expectations, and so when a verdict came down, he left the room and went into this room and I heard him crying," Coates said. "So I let him cry for quite a bit and then I went and I talked to him, and I essentially said, 'As brutal as this sounds, get used to it. Get used to it. This is your country and you have to figure out how to live here.'"

Being a dad in New York City, Coates said it's hard to conceal things from his son. So instead of trying to comfort him, Coates tried to be transparent.

"Just living as an African American in this country and just knowing what his life was going to be like, I've always tried to talk to him directly and honestly," Coates said.

One thing Coates shies away from, however, is telling children they have to work twice as hard to be a successful black person - as some parents of minorities might instill in their kids.

"I understand the intent of it; I understand what people are trying to do. People are very worried about their kids, but these are children," Coates said. "And I think part of what happens, in addition to the very real racism you confront out in the world, is that your childhood is robbed of you because people tell you at age 10 that you have to act like you're 30 years old."

What's delaying the progress are Americans themselves, he said.

"One of the things I'm trying to reckon with in this book is the fact that we were born out of a great moral error, if we'll call it that. The taking of land from one group of people and the enslaving of another group of people to work that land," Coates said. "We have never actually in any sort of forthright way grappled with that and gotten over that, and until we do, we'll continue to probably have books like that."

Among those praising Coates for his new book and calling it "required reading" is author Toni Morrison, who wrote, "I've been wondering who might fill the intellectual void that plagued me after James Baldwin died. Clearly it is Ta-Nehisi Coates. The language of 'Between the World and Me,' like Coates' journey, is visceral, eloquent and beautifully redemptive. And its examination of the hazards and hopes of black male life is as profound as it is revelatory."

While it may sound like a heavy burden, Coates said he is writing the same thing today as he would have on his blog in his basement, writing what he knows and feels.

Is water the new oil?
Thanks for reading CBS NEWS.
Create your free account or log in
for more features.
View CBS News In
CBS News App Open
Chrome Safari Continue
Be the first to know
Get browser notifications for breaking news, live events, and exclusive reporting.