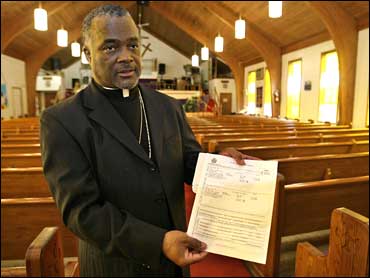 Hundreds of mourners paid their last respects to the man killed on his wedding day by a barrage of 50 police bullets, attending a funeral in the same church where he was to be married to his high school sweetheart.

The service Friday evening for Sean Bell, 23, took place in a Queens neighborhood seething over what residents view as rampant mistreatment of blacks by police. Bell and two companions were unarmed.

"They took his life, but we can't let them take his legacy," the Rev. Al Sharpton said, repeatedly greeted with cheers and "Amens" from the overflow crowd. "We must give Sean a legacy. A legacy of justice, a legacy of fairness. We don't hate cops, we don't hate race, we hate wrong."

Bell was killed and his two friends wounded after a bachelor party early Saturday at a strip club. It is still not clear what prompted officers to open fire on Bell's vehicle, but police apparently feared one man in the group was about to get a gun.

The five officers who fired their guns included two blacks, two whites and one Hispanic.

The Rev. Lester Williams had been preparing to lead Bell and his fiancee through their vows last week, but instead delivered the eulogy. He stressed the importance of forgiveness and urged the congregation to remain calm despite the outrage over the shooting.

"I am angry as hell, but our anger must not cause us to sin," he said.

Earlier Friday, hundreds of mourners at Bell's wake filed past the open casket at the Community Church of Christ.

"It's sad for a young brother like that," said Joseph Barry, 20, of Brooklyn, who attended junior high school with Bell. "It's ridiculous. ... Justice needs to be done, and justice also needs to be served."

Several people outside the church held up signs reading "Justice for Sean Bell." Blue police barricades stretched for about two blocks in anticipation of a large crowd.

Prior to the wake, the relatives of two survivors from the weekend shooting also pleaded for calm.

"Please, let's respect this day, and don't cause no problems," said Denise Ford, the mother of shooting victim Trent Benefield. "We don't need no more trouble."