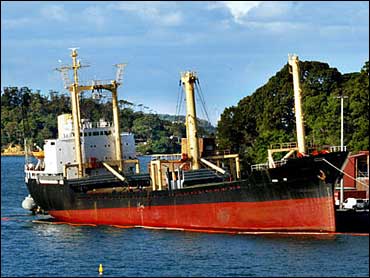 Australian's foreign minister on Friday summoned the North Korean ambassador to a meeting to express concern about the communist government's possible role in trafficking drugs to Australia.

Alexander Downer said the meeting was called after officials discovered that a member of North Korea's government-affiliated Korean Workers Party was on board a ship accused of bringing $50 million worth of heroin to Australia.

Downer told reporters in the southern Australian city of Adelaide that the ship was North Korean-owned and that "it's a totalitarian state, so in effect (the ship) is government-owned."

"Whilst we can't prove that the government made the decision to send this ship and sell drugs into Australia to make money, we are concerned that instrumentalities of the government may have been involved in this," Downer said.

"It would be a matter of very great outrage to us if evidence continues to point to elements of the North Korean government having knowledge of this," Downer said.

Australian authorities raided the ship last month, and charged the ship's 29 crew members with aiding and abetting the import of an illegal product into Australia. Authorities say the heroin had been sent from the ship to Australian shores via dinghy about a week before the raid.

Downer said the ship, Pong Su, registered in the tiny island nation of Tuvalu, was owned by the North Korean Workers' Party and pointed to Pyongyang's possible involvement in regional drug trafficking to shore up funds for its embattled economy.

North Korea has in the past allegedly resorted to the drug trade to inject cash into its flailing economy and fund its huge army and expensive weapons development programs.

The U.S. says it is worried North Korea will also try to turn a profit by selling atomic weapons or technology.

North Korea, which President Bush has listed as a member of the "axis of evil" along with Iran and Iraq, and which this week was categorized again as a state sponsor of terrorism, is in negotiations with the United States over nuclear development.

Japanese officials have accused Pyongyang of filtering methamphetamines and other drugs into Japan. They claim a North Korean government agency could be behind the trade.

In March, Japanese coast guards nabbed a fishing boat that had traveled from North Korea with a supply of drugs.

"It's nothing less than state-organized crime — to feed the Japanese stimulants and put them out of commission," opposition lawmaker Takeshi Hidaka said at the time.

The 4,480-ton Pong Su was moored in a navy dock in Sydney Harbor and federal police have spent days combing it for evidence.

Downer said the crew was being interviewed and that the government has confirmed that a member of the Korean Workers' Party was on board.