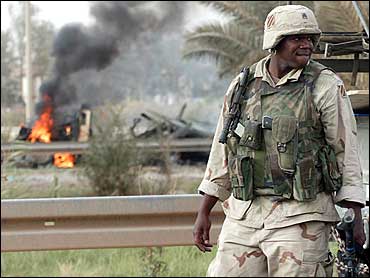 Two American soldiers were killed and four others wounded Monday in two separate incidents in one of the deadliest days for U.S. troops in postwar Iraq.

The commander of U.S. forces in Iraq says not a day goes by without intelligence warnings about threats against his troops. Attacks on American soldiers are increasing in both frequency and ferocity, and ambushes, are their biggest worry, reports CBS News Correspondent David Hawkins.

In Northern Iraq, a U.S. Army supply convoy was ambushed on Monday: one American was killed and another wounded.

In a separate ambush in Baghdad, the lead Humvee in a convoy hit a homemade land mine, killing one soldier and wounding three others.

Pvt. Dustin Meeks was in the convoy. "The Humvee in front of us, it seemed like it hit a bump in the road and it exploded," he recalls. "It's about the biggest explosion I've seen since the war started."

Meeks opened fire on a group of Iraqi men he saw hiding in the bushes, but they all got away.

Pvt. Jason Kleinman, the driver of a trailing Humvee, recalls, "Then we just rushed out and tried to get them out of there."

Kleinman and Meeks pulled two badly burned soldiers from the wreckage. A third man was thrown 15 feet, his arm blown off. Then there were dozens more explosions as ammunition and fuel caught fire. A fourth soldier was hurt in the explosions.

Pvt. Enrique Alvarado helped Kleinman and Meeks rescue the wounded. "We just did our best to get them as far away as possible from the vehicle before it exploded," he says.

The wounded were evacuated by helicopter. The three who rescued them will get medals, says their commanding officer, Lt. Stephen Gleason. "They went in risking their lives to pull out their guys," he says.

Even in Iraqi cities that have not seen such attacks, American troops feel far from secure.

In the western city of Hit, reports CBS National Security Correspondent David Martin, American frustration and Iraqi anger is coming together in a dangerous mix.

One of Iraq's most ancient cities, Hit is patrolled by the 3rd Armored Cavalry Regiment, which is finding these streets as difficult to control as Baghdad's.

In three weeks American troops have not had to fire a single shot in anger, but Iraqis throw stones at U.S. troops.

One demonstrator told CBS News, "[You] destroy our country. Our homeland destroyed. We are against you."

Capt. Ed Palacios says the people of Hit think they are being neglected. And the people are desperate, including the workers at a pumping station -- the only source of clean water for 150,000 -- with no paychecks and no money for repairs to keep it running. Or the father of a four-year-old girl dying of lymphoma who can find no medical care.

Dr. Nayef Enad, an Iraqi doctor, says these problems are now the fault and responsibility of the Americans.

"As long as they are in my country and they are occupying my country," says Enad, "they have to give me drugs, food, anything."

Iraq's civilian administrator, L. Paul Bremer, says troops have done a great deal to re-establish stability, including turning on water and electricity and improving basic services. He says the United States will start a program to help the nation rebuild its economy.

But he acknowledged: "There is still a lot to do, there's no doubt."

In other Iraqi news: