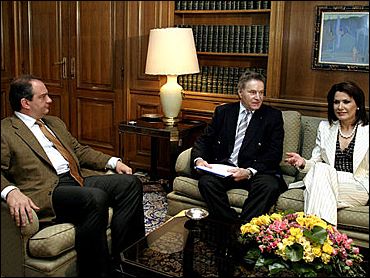 Olympics organizers have managed to overcome worrisome delays and appear on course to meet all key deadlines for the Athens Games, the chief International Olympic Committee overseer said Wednesday.

"In the past, we had doubts ... and I am very happy to report all these doubts have disappeared," Denis Oswald said following a three-day IOC inspection, the final major visit to Athens before the Aug. 13-29 Olympics.

The upbeat tone was in distinct contrast to previous visits, when Oswald and others pressed for faster work and more substantial results. Oswald said he wanted to convey "a message of confidence."

It was a huge relief to Greek Olympic planners who have faced ceaseless criticism and questions about their ability to pull together a successful Olympics. The IOC was so worried about delays and bureaucratic inertia four years ago that it said the games could be in jeopardy.

"No single project is at risk and we know everything will be delivered on time," said Oswald.

The chief organizer, Gianna Angelopoulos-Daskalaki, summed up the mood: "Thank heaven that this progress is finally being made."

Oswald added that round-the-clock efforts to install the roof over the main Olympic stadium stands as a "sign of the capacity of Greece" to meet the tight deadlines.

Engineers Monday began moving one of the 8,000-ton arches along specially built tracks. The glass-and-steel roof is designed to shade the 75,000-seat stadium from the intense summer sun.

The work eased IOC worries about whether the stadium could be ready by the end of June. Organizers also hope the web of metal and glasslike strands will be an enduring image of the Athens Games.

"We have very good news about construction and, of course, the most symbolic is the sliding of the roof," Oswald said.

But there is one aspect neither the IOC nor organizers can fully control: security threats.

Oswald's team met with Greek authorities and representatives of a seven-nation security advisory task force, which includes the United States and Britain. Greek police and military plan to begin a four-day drill Thursday that include terrorist and hostage scenarios.

On Tuesday, Greece's public order minister, Giorgos Voulgarakis, called the triple bombing outside a police station last week "high treason." No one was injured in the blasts, but they touched off worldwide anxiety about safety in Athens. There have been no arrests and no claim of responsibility.

Oswald said the bombings "did not affect" IOC's view of the security planning.

"This summer, no nation will be doing more than Greece to protect those within its borders," Angelopoulos-Daskalaki said.

Although no more full IOC inspection visits are planned, Oswald said he will make follow-up stops in Athens before the games.