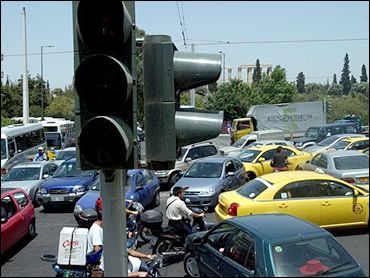 A widespread power outage hit Athens and southern Greece on Monday, cutting off air conditioning as temperatures pushed past 104 and causing traffic chaos in the capital a month before the start of the Olympics.

Power gradually started returning Athens after about 20 minutes. Government officials said electricity would be restored to the entire region during the rest of the day.

Greece's power company would not immediately comment about the outage — the biggest to hit Greece in years.

But government spokesman Panos Livadas said officials were studying the possibility that a malfunction at a major substation in eastern Athens triggered the domino-effect outages shortly before 1 p.m. Some officials also blamed a spike in air conditioner usage because of the heat wave. Temperatures are expected to drop slightly Tuesday.

Government officials also said five new power substations built for the Olympics would also be in operation during the games.

The blackout hit Athens — home to nearly 5 million people — and quickly spread to areas outside the capital. Outages were reported as far as Larissa, about 155 miles north of Athens, parts of the southern Peloponnesus region and some Aegean Sea islands.

The fire department received hundreds of calls about people trapped in elevators.

The blackout also created enormous traffic jams from knocked out traffic signals and stalled electric trolleys. Hundreds of passengers on the Athens subway were taken off cars and had to walk to nearby stations.

Transport Minister Mihalis Liapis was also stuck as he tried to ride on a new metro line to the airport. The blackout also caused some cell phone networks to overload.

Liapis promised that all public transport projects for the Olympics should be completed and working by the end of the month.

The Olympics provided a major incentive to upgrade Athens' transit network, which just a few years ago was anchored by buses and a century-old electric rail.

The 4-year-old subway has been expanded and new rail links have been added, including a tram running from the city center to the seaside, and a suburban rail line. A test run was disrupted by the power outage.

Other projects are also wrapping up after years of delays and headaches for motorists. Widening the route to Marathon — which will be used by Olympics — is scheduled to be finished next week. Also, a widened road opened Monday connecting seaside Olympic venues to the airport.

Greek Olympic planners have faced ceaseless criticism and questions about their ability to pull together a successful Olympics. In May, Olympic organizers said they'd managed to overcome worrisome delays and appeared on course to meet all key deadlines for the Athens Games.

But there is one aspect neither the IOC nor organizers can fully control: security threats.

Earlier this year, a triple bombing outside a police station touched off worldwide anxiety about safety in Athens. There have been no arrests and no claim of responsibility.

Greece has increased its Olympic security budget to more than $1.2 billion. About 70,000 police officers and soldiers will patrol Athens and Olympic venues during the games.

In March, a two-week multinational security exercise tested efforts to safeguard the games from a host of possible threats ranging from hijackings to a dirty bomb.