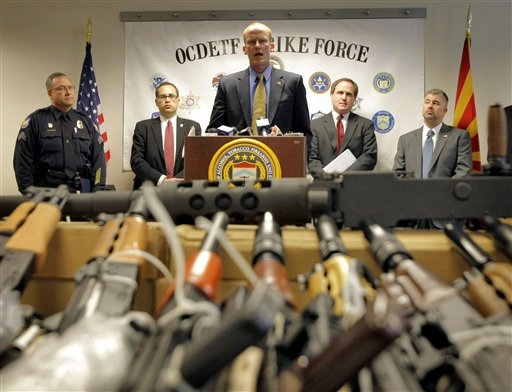 WASHINGTON - An ATF attorney raised "moral objections" to a plan to provide criminals with firearms "to be released into the community, and possibly into Mexico, without any further ability by the U.S. Government to control their movement or future use." That's according to a memo written to the U.S. Attorney in Arizona in July of 2006. Yet ATF went ahead with the so-called "gunwalking," in its operation "Wide Receiver," and later in "Fast and Furious" and numerous other cases.

Gunwalking refers to a controversial investigative tactic allowing guns to be sold to suspected traffickers to see where they'd end up, and try to take down a "big fish" in a drug cartel. As CBS News reported last March, Wide Receiver let hundreds of weapons "walk" in 2006 and 2007, prior to inception of the larger Fast and Furious operation in 2009 and 2010.

The 2006 memo citing "moral objections" from ATF's legal counsel is among more than 600 pages of subpoenaed documents turned over this week to Congressional investigators. The memo asks then-U.S. Attorney Paul Charlton to weigh in on the gunwalking proposal. Charlton told CBS News he has no memory of the memo but "I don't believe I would have or ever did approve letting guns walk." He says his Assistant U.S. Attorney on the case at the time recently assured him the memo was disapproved.

"It's almost an I.Q. test," Charlton told CBS News, meaning nobody would approve the "preposterous" idea as outlined in the memo. But he notes, "Somebody did it (gunwalking) anyway, in disregard of what was disallowed, and repeated it again in Fast and Furious."

Phoenix ATF Special Agent in Charge Bill Newell oversaw both gunwalking operations. Newell was named to head the Phoenix office in June 2006. One month later came the memo seeking approval for the gunwalking. At a January press conference, Newell was asked if guns were allowed to walk in Fast and Furious, and he replied "hell, no." That answer was soon revealed as false, and Newell was transferred to ATF headquarters.

In a strange twist, former U.S. Attorney Charlton, now in private practice, represents the family of a murdered Border Patrol Agent Brian Terry. Guns from Fast and Furious were found at Terry's murder scene. Because of publicity surrounding Charlton's connection to a previous gunwalking case, he's stepping aside as lead attorney for the Terry's, and handing that role to a partner.